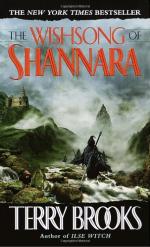 The Wishsong of Shannara Themes

Throughout the novel, Brin struggles with the ethics of using her wishsong. Growing up, her father had ordered her not to use her magic. She had thought it was only a toy, but the Druid Allanon shows her that it is potentially a force for much more, including great destruction. During her journey to the Maelmord, Brin repeatedly vows not to use her magic because she feels it starting to overwhelm her, but then something threatens and she breaks her vow. She is troubled by the sense of glee she feels after taking another life, even though her life had been threatened moments before. Ultimately Brin and Jair use their wishsong to destroy the dark magic of the Ildatch, but only when they combine that magic with love.

In "The Wishsong of Shannara," different groups live separately and shun the notion of unity. Men...

The Wishsong of Shannara from BookRags. (c)2022 BookRags, Inc. All rights reserved.