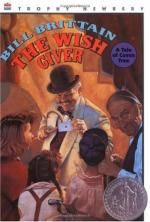 Bill Brittain
This Study Guide consists of approximately 34 pages of chapter summaries, quotes, character analysis, themes, and more - everything you need to sharpen your knowledge of The Wish Giver.

Coven Treeappears in All Sections

Coven Tree is the name of the town around and within which the action of the book is centered. The name is significant for two reasons. First, in the story, the name comes from the gnarled old tree around which "covens" (groups) of witches gathered. Second, the name is reminiscent of that of Coventry, a city in England with a large, centuries old cathedral first constructed in the 1400's that was mostly destroyed by bombings in World War II. It may be, in fact, that the destruction of the cathedral by the Nazis, a military empire held by many to be the 20th century embodiment of evil, can be seen as a metaphor for the evil brought to Coven Tree by Thaddeus Blinn.

This is the yearly community event at which Stew Meat and the three young people (Polly, Rowena...

More summaries and resources for teaching or studying The Wish Giver: Three Tales of Coven Tree.