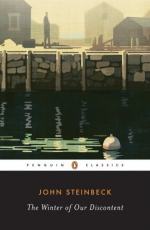 The Winter of Our Discontent Summary & Study Guide

The Winter of Our Discontent Summary & Study Guide Description

The Winter of Our Discontent Summary & Study Guide includes comprehensive information and analysis to help you understand the book. This study guide contains the following sections:

This detailed literature summary also contains Topics for Discussion and a Free Quiz on The Winter of Our Discontent by John Steinbeck.

Ethan Hawley is married to Mary, and has two teenage children, Allen and Ellen. The family resides in a house that has been passed down to Ethan by his grandfather, in the New England town of New Baytown. Ethan's ancestors are Pilgrims, whalers and pirates. Ethan was raised by his father, his grandfather, and his Aunt Deborah, as his mother died when he was young. He has no siblings. He was educated at Harvard, and was a Captain in World War II. It is now 1960, and Ethan is a grocery clerk in the store he once owned.

Ethan walks to work daily, and sometimes goes to the old harbor. He has grown up in this town and knows everyone. His childhood friend is Danny Taylor, who is now the town drunk. Ethan has a special secret place down by the harbor where he goes to sort things out, as he has since childhood.

Allen is a young man who is worried about how others see him, and interested only in money. Ellen is dreamy, and a sleepwalker, who shares her father's fascination with an odd stone in the family's heirloom collection, a talisman.

The novel begins with Good Friday. Ethan encounters many people during the day, and each encounter foreshadows change in his life. The town banker advises him concerning Mary's recent inheritance. Mary's best friend, Margie, comes to the store and flirts openly with Ethan, and his rebuff causes Margie to slant her Tarot card reading for Mary in such a way to change Ethan's life. A salesman offers Ethan a bribe. The bank teller, Joey Morphy, tells Ethan his dream of robbing a bank, and in doing so teaches Ethan how not to get caught in a crime.

Marullo, who now owns the grocery store, attempts to help Ethan with business advice, but instead the two men get into an argument.

That night at home, Ethan's children announce they are entering an essay contest so they can win prizes and money. Allen tells Ethan he is tired of being poor, and Ellen asks him when they will be rich. Mary says Margie read her fortune and Ethan will be rich by July. Ethan is dismayed and surprised to find that his family thinks he is a failure. He goes on a late night walk to the harbor, visits his secret place, trying to sort things out. That night he sees Danny Taylor, his childhood friend, and attempts to help him.

On Saturday before Easter, Ethan walks with Joey Morphy to work and hears Joey's modern views about doing business. At the store, Ethan suggests to Marullo that he go back home to Sicily to see his family. Baker the banker stops by to ask the Hawleys to tea on Sunday, and Mary calls to let Ethan know her friend Margie is coming to dinner that night.

Margie comes to dinner at the Hawley house, and Ethan manipulates her into reading his fortune again because he knows she had changed it to spite him for his actions the day before. Margie attempts to read it, but is disturbed by what she sees, and leaves early.

Ethan begins to think about how to get the fortune his family obviously wants, but he is unsure what will happen to his character if he follows the advice of others. On Easter Sunday, he and Mary attend church, and then go to tea with the Bakers. Mary believes they should follow Baker's advice because the alleged fortune is in the works.

Ethan goes back to see Danny Taylor because he is on his mind a lot lately. Danny is drunk, but they have enough of a conversation for Ethan to realize Baker has been there that night and tried to get Danny to sign away Taylor Meadow, the only land he has left. Ethan tells Danny to get cured and sober so he can fight this attempt. Ethan offers to pay for a cure and Danny asks for $1,000.

The next day Ethan deceives Mary into thinking the money is for an investment recommended by Baker and takes the money to Danny's shack. The next morning there is a brown envelope under the store's door, and it is the deed to Danny's land, and Danny's will.

Part Two of the novel begins some months later, with the approach of the July 4th holiday. Morphy believes Marullo is in the country illegally, and Ethan calls the Immigration officials. Ethan is still sorting out the events of Easter weekend, and has made some decisions. Margie decides to make a definite play for Ethan, but gets nowhere. There are rumors in town that some of the town managers are under suspicion by the state attorney's office.

Ethan tells Baker several lies in order to manipulate him into providing Ethan with conveyance papers for the store and pulling money out of Mary's account. Baker's greed and need for Ethan to locate Danny makes him violate all the rules and comply with Ethan's requests.

Marullo tells Ethan he is a good honest man, and then gives him money and time off for a holiday. Later, he tells Ethan they should be partners.

The game of robbing the bank is no longer a game, and Ethan has decided to act on his plans. Just as he is about to begin the robbery, he is prevented from taking the action. Walder, the immigration official, comes to see him and tells him that Marullo has been deported and his last action was to give Ethan the store.

Ethan and Mary go on holiday alone, as Margie has volunteered to take the children to New York City. While on holiday, Mary receives a call from Margie telling them Allen has won honorable mention in the contest.

Allen is very dignified and calm about the prize, and Ellen is proclaiming him a hero. A celebration is planned for the next night.

The next day, Ethan negotiates a six percent cut from Biggers, and gets all the necessary papers from Baker. He is feeling better about everything, but then Chief Stoney comes in and tells him Danny is dead. Ethan confronts Baker and reveals that Ethan is now the owner of the Taylor Meadow so coveted by Baker and his associates. Ethan negotiates a fifty-one percent cut.

Ethan goes home to a party, but is depressed. He goes out for a walk and is intercepted by Margie, who takes him to her house. She throws herself at him and says she will be his friend and keep all his secrets for a small percentage of Ethan's profit on Taylor Meadow. He leaves and goes back home.

A representative from the essay contest is at the house and tells Ethan they have discovered Allen's essay is not legitimate. It was copied from several nineteenth century speeches, and someone sent them a postcard from New York City advising them of the fraud. Ethan confronts Allen, but the boy does not see anything wrong with his actions.

Ethan grabs a packet of razors from the bathroom and leaves the house, but not before Ellen tries to stop him. Ethan heads for his special secret place by the harbor. He enters it with the intent to open his veins with the razors. When he reaches in his pocket, he finds the talisman. He realizes Ellen is the rightful owner of the talisman now, and struggles against the rising tide to get out and take it back to her.

The Winter of Our Discontent from BookRags. (c)2022 BookRags, Inc. All rights reserved.