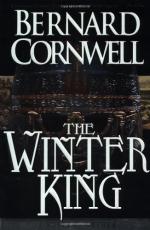 The Winter King: A Novel of Arthur Summary & Study Guide

Bernard Cornwell
This Study Guide consists of approximately 64 pages of chapter summaries, quotes, character analysis, themes, and more - everything you need to sharpen your knowledge of The Winter King.

The Winter King: A Novel of Arthur Summary & Study Guide includes comprehensive information and analysis to help you understand the book. This study guide contains the following sections:

This detailed literature summary also contains Topics for Discussion and a Free Quiz on The Winter King: A Novel of Arthur by Bernard Cornwell.

The Winter King by Bernard Cornwell begins a three-novel story of Arthur, showing him intending to unite Britain against the invading Saxons and Irish, but indulging his passion for Princess Guinevere sowing the seeds of civil war. The novel examines closely the society of fifth-century Britain, particularly the growing clash between pagans and Christians.

The Winter King by Bernard Cornwell purports to be the reminiscences of an aged monk, Derfel Cadarn, who is trying to debunk the growing Camelot legends by recording his eyewitness account

as Arthur's right-hand man. Each of the five parts begins with the two of them and Derfel's cranky superior, Bp. Sansum, also a participant, discussing the project.

The High King Uther needs an heir, but his grandson Mordred is born crippled. Christian and pagan attendants compete from the delivery onward to control and manipulate him. Uther's illegitimate son, Arthur, banished to Normandy, is summoned to protect the child after his mother Norwenna is brutally murdered by her new husband, King Gundleus of Silesia, who wants the throne. The baby king escapes assassination but it nearly ceased by Gundleus before Arthur arrives.

As part of the power balancing among kingdoms, Arthur is betrothal to Princess Ceinwyn of Powys, but jilts of her to marry Guinevere of Henys Wryn. Ceinwyn's father, Gorfyddyd, vows to avenge her by taking Arthur's life, and the peace of Britain is destroyed. As warfare breaks out with the invading Saxons, King Ban of Benoic across the English Channel, whom Arthur had served as warlord while living in exile, demands that Arthur live up to his oath to defend him against the Normans. Unable to keep his oath, Arthur dispatches Derfel to do his best. Derfel immediately clashes with Edling (Crown Prince) Lancelo, but befriends his half-brother Galahad. The Normans besiege the island capital, Ynys Trebes, home to irreplaceable manuscripts from antiquity. Derfel finds the Druid Merlin, missing from Britain for years, in monastic disguise working in the library. They narrowly escape to Britain.

Merlin again disappears on his own business to restore Britain to its pre-Roman Gods, while Derfel rescues his beloved Nimue, Merlin's lover and priestess, from the Isle of the Dead. Arthur's foes mass against him and a major battle becomes inevitable. It takes place at Lugg Vale, after which Britons are united to face the growing Saxon hordes.

More summaries and resources for teaching or studying The Winter King: A Novel of Arthur.

The Winter King: A Novel of Arthur from BookRags. (c)2022 BookRags, Inc. All rights reserved.