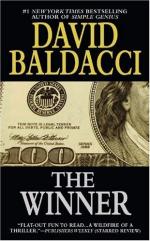 The Winner Summary & Study Guide includes comprehensive information and analysis to help you understand the book. This study guide contains the following sections:

This detailed literature summary also contains Topics for Discussion and a Free Quiz on The Winner by David Baldacci.

In David Baldacci's novel, The Winner, LuAnn Tyler encounters the sinister mind of a criminal who calls himself Jackson. After surviving a childhood of abuse, "Jackson" sets his sights on recouping his family's lost fortune through illegal activity. Jackson is more than just a thug; he is brilliant. As such, his crimes are nearly impossible to solve. He preys on those whom he feels are vulnerable. He believes they will follow his directions unquestioningly and do virtually anything if paid enough. When Jackson chooses LuAnn as one of his flock, however, he is unprepared for her inner strength.

LuAnn was raised and remains in a state of poverty. She is not easily intimidated and is used to hard work. Her lack of monetary means does not mean that she is so poor as to be without hope. LuAnn was raised well by her mother and is doing her best to raise her daughter, Lisa, lovingly. When LuAnn accidentally walks in on her boyfriend's drug deal gone sour, she suddenly finds herself a suspect in his murder. To escape prosecution and a continued life of poverty for her daughter, LuAnn accepts Jackson's offer for employment. She buys a lottery ticket and shares with him the numbers. He then rigs the system so that she wins and takes a percentage of the profit. Jackson is a man of many resources. He is able to provide her with a new identity, and she flees the country with her winnings.

LuAnn spends ten years abroad. Jackson's secret is safe, and her privacy is assured. However, LuAnn eventually tires of running and returns to the United States under her new assumed name. Her presence worries Jackson and her return tips off a ripple of questions. An award winning reporter, Thomas Donovan, traces her travels and questions the legality of her winning. In order to keep his secret safe Jackson begins eliminating each witness, with LuAnn and her daughter as his main focus. With the help of her romantic interest, Matt, and her friend, Charlie, LuAnn is able to defeat Jackson. Matt, a former FBI agent, helps her to make a deal with the FBI where, in exchange for Jackson, she avoids jail time for her involvement in the lottery. The book closes with LuAnn, now very humbled, living safely with Matt, Lisa, and Charlie.

The Winner from BookRags. (c)2022 BookRags, Inc. All rights reserved.