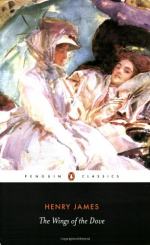 The Wings of the Dove Summary & Study Guide

Henry James
This Study Guide consists of approximately 28 pages of chapter summaries, quotes, character analysis, themes, and more - everything you need to sharpen your knowledge of The Wings of the Dove.

The Wings of the Dove Summary & Study Guide Description

The Wings of the Dove Summary & Study Guide includes comprehensive information and analysis to help you understand the book. This study guide contains the following sections:

This detailed literature summary also contains Topics for Discussion and a Free Quiz on The Wings of the Dove by Henry James.

In The Wings of the Dove, Henry James provides a rather unique approach to the timeless issues of selfishness, greed, conspiracy, love, and betrayal - universal themes in literature since early Greek theater. James sets his novel in turn-of-the-century London, a society that remains steeped in Victorian tradition and social mores that appear ridiculous to the contemporary youthful reader.

Kate Croy is in love with a poor journalist, Merton Densher. Unfortunately, despite her meager upbringing, Kate is now living with her wealthy and socially elite Aunt Maud Lowder, a woman who will never agree to their marriage. Social mores demand Maud's approval, and Kate and Merton are therefore at an impasse in their relationship. Enter Milly Theale, a lovely, altruistic heiress from America, who has no family and who is terminally ill. Once apprised of Milly's medical situation, Kate launches a plan to achieve marriage with Densher. He must court Milly, marry her, wait for her to die, inherit her fortune, and then, as a wealthy widower, marry Kate with Maud's blessing. Maud is pushing this new relationship, as well, for, in it, she sees the end to the threat of Kate marrying beneath her socioeconomic status.

Unfortunately, both Milly and Densher throw wrenches into the plans and schemes of both Kate and Maud. Milly is a thoroughly unselfish young lady, who, faced with her own mortality, has decided that her purpose shall be to bring peace and happiness to those she considers her friends. Densher, for his part, becomes increasingly uncomfortable with his part in Kate's scheme, and, in the end, though spurred somewhat by the treachery of Lord Mark, who has revealed to Milly the love of Kate and Densher, cannot continue the ruse and confesses to Milly that he and Kate have been secretly engaged for quite some time. Milly, upon learning this, urges Densher to return to Kate, in order to pursue his true happiness. As well, Milly leaves a large bequest to Densher, upon her death, hoping to seal the marriage for him and Kate. Densher, now decidedly miserable about his part in the plot, presents Kate with a difficult choice. They must both renounce the bequest and enter marriage free of any taint, or, if she refuses this choice, she will be given the entire bequest and Densher will not marry her. Kate, realizing that Densher is most certainly in love with the memory of the beautiful spirit that Milly was, walks out, stating that they will never have the love they once possessed.

Among the cast of characters, Milly and Densher, along with Susan Stringham, Milly's companion, are seen as the ethical, principled individuals who must be true to their basic moral principles. Milly stands above all, however, having spent the final days of her life with concern for others. Kate, whose scheme has backfired, has lost the man she loves because she cannot incur the wrath of her aunt and thus lose her lifestyle of opulence by marrying a man and entering a life of lower class. Maud and Lord Mark, although to the modern reader firm in their

morally bankrupt elitist attitudes, have remained true to their characters and emerge with their stations intact.

More summaries and resources for teaching or studying The Wings of the Dove.

The Wings of the Dove from BookRags. (c)2022 BookRags, Inc. All rights reserved.