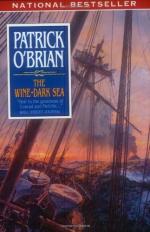 Patrick O'Brian
This Study Guide consists of approximately 36 pages of chapter summaries, quotes, character analysis, themes, and more - everything you need to sharpen your knowledge of The Wine-dark Sea.

This detailed literature summary also contains Topics for Discussion and a Free Quiz on The Wine-dark Sea by Patrick O'Brian.

Surprise, a British hired vessel of war, is nominally commanded by Tom Pullings, but in actual fact is commanded by Jack Aubrey. The ship's secret mission is to transport Stephen Maturin, an undercover agent of the British Naval Intelligence service, to Peru where he will use British money and local contacts to foment a rebellion against Spanish rule in favor of local autonomy. The mission must remain very secret because Spain is a theoretical ally of Britain. Surprise voyages across the Pacific Ocean, taking a few prizes and having some exciting adventures, before landing Maturin in Peru. One of the ships captured by Surprise contains a Frenchman named Dutourd. Dutourd is a champion of civil rights and equality and his radical ideas of free society are quite appealing to some crewmembers of Surprise.

While Surprise refits in port, Maturin begins his mission of intrigue; meanwhile, Nathaniel Martin, a long-time friend, leaves Surprise due to ill health. For Maturin, all goes well at first and the local conditions seem perfect for an uprising. But then Dutourd is smuggled ashore and begins to decry Maturin as a British agent. Aubrey, fearing for Maturin's safety, attempts to go ashore in an open boat, unfortunately spending several days fighting for survival in heavy weather. Meanwhile, Dutourd is not very efficient but he is quite vocal. Eventually he is snapped up as a heretic by the Spanish Inquisition, but his presence ashore has been destabilizing enough that Maturin's carefully laid plans unravel. Within days, he has become a fugitive and Surprise is no longer welcome.

With assistance from Sam Panda, Aubrey's illegitimate son and local priest, a rendezvous is arranged, and Surprise sails away while Maturin travels overland. Maturin is accompanied by Eduardo, a local guide of great biological knowledge. Maturin makes the voyage with difficulty, the altitude and cold are telling and he loses a few toes to frostbite. However, he finds the travel through the high Andes rewarding as he views numerous new types of animal and plant life. Maturin is finally united with Surprise and the long voyage home begins. Surprise meets a pair of American ships in heavy weather, dense fog, and plentiful icebergs near the point of South America. A running fight ensues and Surprise escapes only later to be struck by lightning. Nearly completely disabled, Surprise begins the arduous voyage to Africa but is fortunately rescued by a passing British ship-of-war who renders assistance and supplies.

More summaries and resources for teaching or studying The Wine-dark Sea.