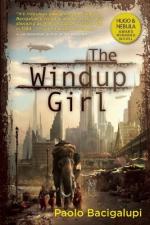 Paolo Bacigalupi
This Study Guide consists of approximately 51 pages of chapter summaries, quotes, character analysis, themes, and more - everything you need to sharpen your knowledge of The Windup Girl.

This detailed literature summary also contains Topics for Discussion on The Windup Girl by Paolo Bacigalupi.

"The Windup Girl" by Paolo Bacigalupi is a critically acclaimed science fiction novel about thirty-third century Thailand where food production and distribution is controlled through mega corporations. The novel focuses on the events leading up to a civil war, specifically how Emiko, a windup girl created in Japan, provides a reason by assassinating one of the most important men in the Kingdom. "The Windup Girl" is a fascinating tale of this future society.

Anderson Lake owns the SpringLife factory, but it is only a cover for his true mission, locating the Thai seedbank. His employee, Hock Seng, embezzles from the company as he plots to steal the blueprints for the king springs they manufacture. Emiko, a windup girl who works as a sex slave for Raleigh, tells Anderson what one of her customers told her about the seedbank and Gi Bu Sen, and Anderson tells her about the village in the north filled with New People after which Emiko dreams of escaping to the village. Hock Seng makes a deal with the Dung Lord to sell him the blueprints because he failed to bribe the officials to import the necessary equipment to fix the factory.

Jaidee inspects the shipment and destroys the contraband which displeases many important people who have his wife kidnapped. Jaidee makes a public apology and accepts a demotion, but when he learns his wife is dead, he infiltrates the Trade Ministry where he is captured and murdered. His body is deposited on the front steps of the Environment Ministry, causing an uprising among the white shirts, and Kanya is appointed as his replacement. When Mai finds a new plague in the factory, Hock Seng orders her to hide it, yet he helps her escape when the enraged white shirts invade the building.

Meanwhile, Anderson and Carlyle negotiate with Akkarat for access to the seedbank, and Anderson becomes infatuated with Emiko. Kanya learns about the plague and seeks aid from Gi Bu Sen. During Anderson's negotiations with the Somdet Chaopraya, he introduces the official to Emiko, but when the Somdet Chaopraya's acts prove too humiliating, Emiko kills him and eight others before seeking refuge with Anderson. Akkarat assumes that Emiko is a military windup, blames Pracha and uses it as an excuse to wage civil war. When Kanya learns of this plan, she investigates, learning that Emiko is not a military windup, yet Akkarat still blames Pracha, wages war and kills the highest ranking officials in the Environment Ministry, leaving Kanya as the ranking officer. After the Dung Lord's men steal the kink-spring blueprints, Hock Seng captures Emiko to hold for ransom; Anderson negotiates with Hock Seng, offering him AgriGen's patronage to release Emiko.

Having killed General Pracha and the other leaders of the Environment Ministry, Akkarat appoints Kanya as the head of the Ministry, and he grants seedbank access to the farang; however, Kanya disagrees with his decision and kills the farang before moving the seedbank to a safer location and destroying the levees to flood Bangkok. She and the Queen then relocate the citizens to Ayutthaya where Kanya becomes the new Tiger, and the Queen rules without a Somdet Chaopraya. Akkarat becomes a monk to atone for his failure to protect the city, and Emiko nurses Anderson until his death from the new plague. She lives alone in the city until Gibbons visits and promises to use Emiko's genes to create a fertile race of New People, fulfilling Emiko's dream of living with her own kind.

More summaries and resources for teaching or studying The Windup Girl.