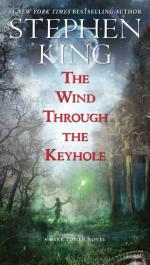 The Wind Through the Keyhole: A Dark Tower Novel Summary & Study Guide

Stephen King
This Study Guide consists of approximately 44 pages of chapter summaries, quotes, character analysis, themes, and more - everything you need to sharpen your knowledge of The Wind Through the Keyhole.

The Wind Through the Keyhole: A Dark Tower Novel Summary & Study Guide Description

The Wind Through the Keyhole: A Dark Tower Novel Summary & Study Guide includes comprehensive information and analysis to help you understand the book. This study guide contains the following sections:

This detailed literature summary also contains Topics for Discussion on The Wind Through the Keyhole: A Dark Tower Novel by Stephen King.

"The Wind Through the Keyhole" by Stephen King is the eighth book in the Dark Tower series, though it falls between books four and five chronologically. While taking shelter from a storm, Roland tells his three companions a personal story from his youth as well as a story his mother told him when he was a boy. "The Wind Through the Keyhole" is an interesting combination of two stories within the larger context of the Dark Tower series.

In "Starkblast", Roland, Eddie, Susannah and Jake are traveling along the Path of the Beam toward the Dark Tower when an approaching starkblast forces them to take shelter in a meeting hall in the abandoned village of Gook. To entertain his companions, Roland tells two stories, a true story from his youth and a tale that his mother told him as a child. In "The Skin-Man", the story from his youth, Steven Deschain, Roland's father, sends two gunslingers, Roland and Jamie, to rescue the town of Debaria from a skin-man who is ripping people apart. Working with the sheriff to solve the mystery, Roland is appalled by the devastation the creature wreaks, and when he finds a witness to the skin-man, Young Bill Streeter, Roland uses his hypnosis to extract additional information from the boy's mind, finding that the skin-man has a blue ring tattooed around his ankle. While waiting for Jamie and the sheriff to return from the miners' encampment with miners who are able to ride horses since they found fresh manure at the scene of the crime, Roland tells Bill the story of "The Wind Through the Keyhole" to calm his nerves, recalling how his mother told him the story when he was young.

A young boy, Tim lives happily with his parents in the village of Tree at the edge of the Endless Forest until his father, Big Ross, never returns from a venture into the Endless Forest and his partner, Big Kells, tells Tim and Nell that Ross was killed by a dragon. Nell marries Big Kells who becomes very abusive when he drinks, causing Tim to hate his stepfather. When the Covenant Man visits, he gives Tim a key to unlock anything, and Tim uses to unlock Kells' trunk, finding his father's lucky coin inside. Visiting the Covenant Man in a clearing, Tim stumbles upon his father's corpse and heeds the tax collector's suspicions that Kells murdered Ross. During this encounter, Kells beats Nell, blinding her, for opening his trunk before hiding from the townsmen who search for him for Ross's murder.

Finding and using the Covenant Man's wand, Tim sees a vision of receiving a cure from Maerlyn of the Eld for his mother's eyes, so he ventures into the Endless Forest where he faces many dangers. A magical disk given to him by the mudmen leads him to the North Forest Kinnock Dogan where Tim finds a caged tiger. He and the tiger take shelter in the Dogan during a starkblast, and the next day, Tim administers liquid from a brown bottle found in the Dogan to the tyger, causing it to transform into Maerlyn of the Eld who instructs Tim to use the remaining liquid to cure Nell's eyes. He also directs Tim to give Nell the hand ax that belonged to Big Ross as soon as he cures her eyes. Tim flies home on a dibbin, cures his mother's eyes and gives her his father's hand ax. When he attempts to wake Widow Smack, he finds that she is dead, but before he can react, Kells begins choking him until Nell plants Big Ross's ax in the back of Kells' head. Tim retrieves the gun given to him by Widow Smack which he used during his adventure as Maerlyn foretold that he would become a gunslinger.

Shortly after Roland finishes the story, Sheriff Peavy, Jamie and the other men return with a group of miners who are able to ride horses. Roland parades the miners with blue rings tattooed around their ankles past Bill to identify the skin-man, and when Bill remembers that the murderer's tattoo was different, he identifies Ollie Ang who has a thick white scar running through his tattoo. After killing the skin-man, Roland returns to Serenity to see Everlynne who gives him a letter from his mother, Gabrielle Deschain, explaining that she knew she would die at her son's hand when she returned to Gilead, but she forgives him and asks his forgiveness in turn as he killed her because Gabrielle betrayed her family by becoming the consort of Marten Broadcloak and Roland was tricked by the witch, Rhea of the Coos. Finishing his stories, Roland and his ka-tet ride out the rest of the starkblast before continuing on their journey toward the Dark Tower.

More summaries and resources for teaching or studying The Wind Through the Keyhole: A Dark Tower Novel.

The Wind Through the Keyhole: A Dark Tower Novel from BookRags. (c)2022 BookRags, Inc. All rights reserved.