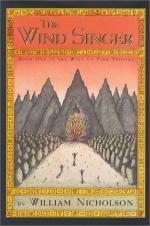 William Nicholson
This Study Guide consists of approximately 25 pages of chapter summaries, quotes, character analysis, themes, and more - everything you need to sharpen your knowledge of The Wind Singer.

This detailed literature summary also contains Topics for Discussion on The Wind Singer by William Nicholson.

"The Wind Singer" is a young adult novel by William Nicholson which details the adventures of siblings Bowman and Kestrel Hath, and their friend Mumpo, to save the city of Aramanth from the evil Morah and the Zars.

Aramanth is a wealthy and powerful city that grew on the salt trade. It is a city constructed around a central arena, which surrounds a giant statue known as the wind singer. Built by mysterious strangers, the wind singer once kept away the evil Morah and her Zar army, but now no longer sings. The city measures the lives of its citizens based on their intelligence and knowledge, and gives them ratings based on that. The higher the rating, the better and wealthier the district the citizens and their families can live in.

In a middle district live the Hath family, and siblings Bowman and Kestrel. Kestrel is tired of the caste system in the city, and not having much freedom, so she rebels by climbing the wind singer. Her disobedience lands her family in trouble, and they are demoted. Rather than be forced into remedial school, Kestrel flees, and accidentally meets the Emperor, Creoth. Creoth charges Kestrel with the task of making the wind singer sing again by going to retrieve a silver talisman from the Hall of Morah down the Great Way. Kestrel agrees, and with her brother and their new found friend Mumpo, escape the city by way of the Underlake, with help from its mud people.

Out beyond the city walls, the children are caught up by the Ombaraka people, who believe them to be spies. When the children help the Baraka people defeat their Chaka enemies, the Baraka bring them to the Great Way and drop them off. From there, Bowman, Kestrel, and Mumpo journey toward the mountain that spews fire in the distance, where they enter the Hall of the Morah. They recover the wind singer talisman, but accidentally awaken the Morah and her Zar army, which then march on Aramanth. The three children race back ahead of them, scramble through the city, and place the talisman into the singer, causing the tower to sing. The song cripples the Zar army, turning them all into skeletons and killing them.

More summaries and resources for teaching or studying The Wind Singer.