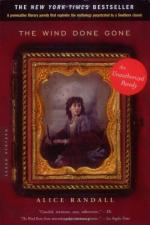 Alice Randall
This Study Guide consists of approximately 30 pages of chapter summaries, quotes, character analysis, themes, and more - everything you need to sharpen your knowledge of The Wind Done Gone.

The Wind Done Gone by Alice Randall is a parody of the classic novel, Gone with the Wind. In this novel, Randall takes a look at the unaddressed question in the original novel of mulatto slaves on Tara. The main character is Cynara, the daughter of the O'Hara family mammy and Gerald O'Hara, master of Tara. Cynara was sold away from the family at a very young age, but managed to make her way back into the life of half-sister, Scarlett O'Hara, through their mutual lover, Rhett Butler. The Wind Done Gone is the story of one woman who must make peace in her own heart with the question of slavery and the resulting treatment that she received from both her white parent and her black parent.

Cynara lives in Atlanta not far from the home that her lover, R., once shared with his wife and Cynara's half-sister, Other. R.'s child with Other has recently died and the resulting fallout of the child's death coupled with the death of a close family friend has caused a split in R.'s marriage to Other. Not long after this split, Cynara learns that her mother, the O'Hara family mammy, is dying. Cynara struggles with her decision to return home to see her mother one last time because her last departure from the home plantation, Tara, or as Cynara calls it, Tata, was not a pleasant one.

Cynara recalls being sold by her biological father as a child because, as the letter she still carries explains, he was concerned about her becoming a distraction to her mother in the care of the family's eldest child, Scarlett, or as Cynara calls her, Other. Cynara recalls her mother appearing ambivalent to the decision. Despite this, Cynara returns home, but arrives too late to see her mother. Cynara is told that Mammy tried to wait for her, watching the road for her return. However, Cynara finds herself wondering if perhaps Mammy was more concerned over Other than herself.

After the funeral, Cynara speaks with some of the people who worked closely with her mother for many years, including Garlic, her father's former valet. Cynara learns how her mother came to be a member of the O'Hara household after the lady she worked for married Mr. O'Hara in the aftermath of the death of her one true love. Cynara also learns that her mother was heartbroken when Mr. O'Hara sold Cynara away. When Cynara returns to Atlanta, she begins to remember many things from her childhood and see them in a different way. While her mother had always seemed very close to Other, Cynara remembers how she bonded with Mrs. O'Hara.

R. takes Cynara to Washington, D.C. where they live openly together. When Other dies in a fall, R. leaves Cynara in the city alone to deal with Other's eldest two children. Cynara is introduced to many people, including Frederick Douglass and a black congressman whom she finds very attractive. Cynara finds herself wondering what it would be like to have a man such as the congressman, but then R. returns and she finds herself struggling not only with her own sense of self, but with the idea that she belongs to R. in some way.

R. brings Cynara some letters that once belonged to Lady, Mrs. O'Hara. In these letters, Cynara learns of the affair Lady once had with her cousin. Cynara also learns that Lady and her lover had black ancestry, but wanted to marry anyway. This leaves Cynara filled with the realization that love can conquer all.

After returning to Atlanta with R., Cynara becomes unhappy. Cynara returns to Washington alone and has a brief affair with the congressman. However, Cynara knows that because of her relationship with R., even though it has ended, will make it impossible for the congressman to continue his career with any amount of success, she encourages him to marry another. When she gives birth to his son, Cynara gives the child to the congressman and his new wife.

More summaries and resources for teaching or studying The Wind Done Gone.