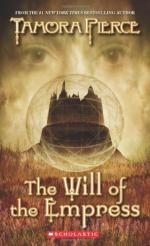 The Will of the Empress Summary & Study Guide

Tamora Pierce
This Study Guide consists of approximately 54 pages of chapter summaries, quotes, character analysis, themes, and more - everything you need to sharpen your knowledge of The Will of the Empress.

The Will of the Empress Summary & Study Guide Description

The Will of the Empress Summary & Study Guide includes comprehensive information and analysis to help you understand the book. This study guide contains the following sections:

This detailed literature summary also contains Topics for Discussion on The Will of the Empress by Tamora Pierce.

"The Will of the Empress" by Tamora Pierce is a fictional account of four young mages who find themselves pitted against an Empress who hopes to increase her holdings by forcing them to remain within her empirical boundaries. Though young, the mages are strong, and have a combined power that few mages of extensive experience have seen before. Their age causes many to underestimate them, and though as they become adults, they stray from each other and explore other realms, any confrontation or threat posed against one will bring the wrath of four in return.

The first foray from their home in Summersea is an experience that Daja, Briar and Tris will never forget. Sandry is the only one who stays behind, having responsibilities that prevent her from exploring the world like them. She is her Uncle Vedris's right hand person, and handles his estate and books when he is unable to do so himself. Though jealous, she encourages the others to leave her behind. When they return, things have changed. To begin with, the mental channel they've shared since they were young children is closed to Sandry, and when she questions the block, they tell her in different ways that they've grown up, and don't necessarily want to share everything with each other anymore. As such, she is surprised to find that they are willing to accompany her to check on her holdings in Namorn. Her cousin the Empress has been exerting pressure on Ambros, who manages her holdings by raising taxes beyond what can be paid, forcing Sandry as the liege lord to return and petition for a decrease. Before she can arrive however, the Empress reduces the taxes again, and welcomes her warmly, if not totally sincerely.

Secure with her quasi siblings, they are wined and dined, and offered positions of power and wealth in return for their agreements to stay and pledge fealty to Her Majesty, Empress Berenene, but none of them have any real desire to stay. The more they resist, the more pressure is exerted. To complicate matters, Sandry is wealthy enough to attract the attentions of all eligible bachelors hoping to gain land and title by forcing her into a marriage contract by way of kidnapping - an acceptable if abominable practice in Namorn. Three separate attempts are made, and by sticking together, are thwarted. The second attempt happens right in the castle itself, and no longer feeling safe or secure, Sandry announces they are going home. The others are willing and happy to leave, but the Empress is not amused. She charges her mages with the task of keeping her there by isolating the mage she believes is the strongest - Tris. Though spells are cast, traps are set, and mages employed to help, none are strong enough to face these four young mages once they join power. In an exciting conclusion, Sandry and her siblings must overcome the most powerful mage in Namorn - Ishabal, who has constructed a wall to retain them.

More summaries and resources for teaching or studying The Will of the Empress.

The Will of the Empress from BookRags. (c)2022 BookRags, Inc. All rights reserved.