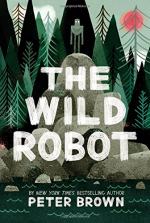 Peter Brown
This Study Guide consists of approximately 39 pages of chapter summaries, quotes, character analysis, themes, and more - everything you need to sharpen your knowledge of The Wild Robot.

This detailed literature summary also contains Quotes and a Free Quiz on The Wild Robot by Peter Brown.

Note: This study guide specifically refers to the April 2016 Little, Brown, and Company First Hardcover Edition of the Wild Robot by Peter Brown.

The Wild Robot is a children’s novel by Peter Brown which recounts the year Roz the robot spends on an island. While there she befriends the local wildlife and raises a baby goose as her son. When the novel begins, a ship sinks in a bad storm off the coast of the island, leaving five crates floating on the water, each containing a robot. Four are smashed to pieces on the shore, while the fifth, containing Roz, winds up safely on shore. A gang of sea otters discovers the crate as the sun comes out. In turn, the sun provides the solar power needed to start up Roz. The otters and all the animals of the island are terrified of Roz, for they do not know what to make of her. They call her a monster. Roz knows nothing about herself other than she is a robot designed to do as she is told and to find better ways of doing what she does.

Upon seeing a camouflaged stick insect, Roz decides she will camouflage herself to better learn about the island and its animals. Roz learns how the animals behave and speak, and so she begins to emulate them. One day, Roz comes across Fink the Fox, injured by porcupine needles. Roz pulls the needles out, helping Fink and earning Fink’s friendship. While climbing down the island cliffs one day, Roz accidentally falls and crushes a family of geese to death, but a single egg survives. From this egg hatches the gosling, Brightbill, so named by Roz for the baby goose’s brightly colored beak. Roz seeks out the assistance of Loudwing for information on raising Brightbill. She works with Mr. Beaver and Tawny the Deer to construct a lodge for shelter and a garden for food. The animals of the forest warm up to Roz as they come to sample from the garden, and Brightbill makes a best friend in young Chitchat the Squirrel.

As time passes, the animals come to love Roz. Brightbill continues to grow, and begins to question Roz and her past. Although Roz is a different kind of mother, Brightbill still considers Roz his mother. He wants to know more about her. It is with great sadness that Brightbill must later fly south for the winter. While he is gone. Roz constructs lodges all over the island for the animals who are not able to handle the especially bitter winter. The animals are thrilled that so many of them are saved. They are very appreciative of Roz’s efforts. At last, the spring comes, and Brightbill and the other migratory birds return to the island. Brightbill explains that during his travels, he discovered a factory with many robots just like Roz. A celebration is held that night to welcome spring and the return of the birds with a great bonfire. This is seen by a ship off the coast of the island.

The next morning, an airship with three RECO robots arrives to take Roz back to the factory to be reprogrammed. The animals come to Roz’s defense and help to destroy the three robots –but Roz is severely damaged in the fighting. Roz realizes her only hope is to take the airship back to the factory and be repaired. If not, more robots will come and cause more destruction looking for Roz. The animals are sad to watch Roz leave, and Brightbill is heartbroken. As Roz leaves, she begins calculating a plan for how she will escape the factory and return to the island to be with her son and her animal friends.

More summaries and resources for teaching or studying The Wild Robot.