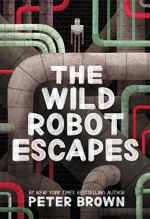 Peter Brown
This Study Guide consists of approximately 49 pages of chapter summaries, quotes, character analysis, themes, and more - everything you need to sharpen your knowledge of The Wild Robot Escapes.

This detailed literature summary also contains Quotes and a Free Quiz on The Wild Robot Escapes by Peter Brown.

The following version of this book was used to create this lesson plan: Brown, Peter. The Wild Robot Escapes. Little, Brown and Company. 2018. Hardcover.

ROSSUM Unit 7134, known as Roz, is delivered to Hilltop Farm. The owner, Mr. Shareef, tells her that she will be in charge of running the farm which she learns how to do overnight. However, when meeting the cows on her own for the first time, Roz reveals that she can talk to animals and has developed a human-like personality during her time on a remote island before the start of the novel. She misses her adopted, goose son Brightbill and dreams of returning to the island. However, due to the transmitter in her body that allows Mr. Shareef to track her movements, Roz is trapped on Hilltop Farm.

Over many weeks of working on the farm, Roz fixes up all of its machines, builds a strong relationship with the cows, and gets to know the children Jaya and Jad. After playing hide-and-seek with her, the children ask Roz to tell them stories. She tells them about a robot on a remote island, but does not reveal that every story is about herself. Eventually, the children open up to her about their own lives on the farm and reveal that their mother passed away. While Roz feels close to the children, she hopes that they will come to love her enough to help her escape.

As many seasons pass, Roz meets a variety of geese that promise to pass on her story to other flocks in hopes of bringing Brightbill to her. However, life on the farm is disrupted when a pack of wolves lead by Shadow try to attack the cows. Unwilling and unable to kill the wolves, Roz uses her expert camouflage skills and successfully scares the wolves away from the farm. However, a few months later, a tornado hits. Roz saves Jad who is paralyzed in terror, but ends up tossed and nearly destroyed by the tornado. After being repaired, she spends more time with the family and learns that Mr. Shareef’s wife was a former worker on his farm when they fell in love. As she raised their children, Mr. Shareef bought more machines to run the farm without them. However, one of those machines killed her, but he does not specify which one. Roz later finds a diary written by Cyrus Shareef in an abandoned barn that she keeps with her.

As Roz gets closer to winter, she begins to lose hope of ever seeing her son again. She considers erasing her memory which would reset her as a normal robot, but decides not to. A few days later, Brightbill and his flock arrive and Roz is thrilled to see him. Unfortunately, the children see this reunion and realize that all of Roz’ stories were about herself. They promise to keep her secret and decide to do their own research to help Roz escape the farm. Brightbill and his flock are forced to leave for the winter, but he promises to return by spring. After the geese leave, Roz prepares the farm for her eventual escape and the children find a diagram of Roz. They use it to take out Roz’ transmitter while Mr. Shareef is sleeping and Roz keeps it with her throughout the winter. When spring arrives, Roz begins to feel guilty for planning an escape as she has grown to love the children and worries the farm will suffer without her. However, when Brightbill returns, the children command Roz to leave knowing that she cannot refuse a direct order. Roz promises to send them a goose feather back once she reaches the island so they know that she made it.

Brightbill and Roz travel for many weeks through forests and over open fields. Roz is forced to camouflage herself whenever an airship flies over. However, after passing many farms, the two make it into the wilderness away from the countryside. They once again run into Shadow and his mate Barb and Shadow announces that he will destroy Roz for revenge as his pack left him when she scared him away from the farm. Roz uses fire to scare the wolves and she and Brightbill continue into the wilderness. However, they are forced to take shelter in an abandoned cabin when Brightbill is injured by hail. Inside, they meet Sparkles the skunk who reveals that Roz’ story has spread from the geese to many other animals.

After Brightbill heals, they continue into the mountains where Roz is forced to confront a pair of hunters who try to kill Brightbill. Later they meet a ram named Thud who occasionally loses control of himself and feels obligated to bash into something. He leads them through the mountains and resists his instinct long enough to send them on a path into a town without injuring Roz. Unfortunately, Roz is once again attacked by Shadow and forced to flee into the ocean in a small rowboat as he reveals that his entire pack and mate left him after he failed to destroy her.

As Roz sails deeper into the water, the rowboat is destroyed by violent waves and Roz begins to sink. She is rescued by a whale named Coral who had heard Roz’ story and was swimming nearby in case Roz needed help. Coral takes Roz and Brightbill across the bay and wishes them luck on the rest of their journey. Unfortunately, Roz and Brightbill come across a series of towns and realize that they must cut through them as going around will be impossible. When Roz tries to get through the first town, she is chased out by a series of barking dogs and narrowly escapes behind a school building. From there, she follows a line of ROZZUM robots to conceal herself. This eventually leads her to a train station where Brightbill encourages her to board to find his pigeon friend Graybeak. It is here that Roz and Brightbill are separated and Roz is forced to navigate the city on her own.

After an unknown amount of time, Roz meets a massive group of pigeons in the city center. All of them are shocked when she speaks to them and realizes that she is the Roz they have heard about from other animals. The leader, Strutter, tells her that Graybeak has passed away and Strutter herself will help Roz find Brightbill. Roz hides in the park but is forced to run as RECO robots find her. Brightbill and Strutter lead her to a tunnel leading to the sewers. From there, she is escorted to another exit by a rat. Unfortunately, she accidentally reveals her human-like personality when she runs into an elderly woman and is forced to run again. The pigeon flock attacks the RECO airship as Roz tries to escape over the rooftops. When she realizes she cannot escape, she tells Brightbill she loves him and tosses him into the sky as Roz is shot off the roof.

She wakes up in a white room and meets her creator Dr. Molovo. The two talk for a long time as Dr. Molovo is fascinated by Roz’ mind and does not know why Roz developed the way she did. Dr. Molovo tells Roz she has to be destroyed because humans are afraid of defective robots. Roz pleads with Dr. Molovo to save her, but Dr. Molovo shuts Roz off. Screens in the city turn on to show the citizens as Roz’ body is melted down. Later, it is revealed that Dr. Molovo saved Roz’ mind and implanted it into a new body. Brightbill arrives and he and Roz remain in Dr. Molovo’s apartment for a few weeks before they decide to return to their island. Dr. Molovo takes them both on an airship straight to the island. Once there, Roz is reunited with most of her previous friends who are thrilled to see her return. Dr. Molovo thanks the animals for protecting Roz and promises that she will never reveal the island’s location. This means Dr. Molovo herself will never return, and Roz thanks her once again. The two hug and Dr. Molovo leaves. The narrator says that Roz and Brightbill are happy to be back, but the narrator does not know how long Roz survives or what she will go on to do.

During the epilogue the narrator returns to Hilltop Farm. As Mr. Shareef looks over a new robot, the children are visited by a goose. The goose gives them one of his feathers, fulfilling Roz’ promise to the children earlier in the novel. Both are thrilled to learn that Roz’ story has a happy ending.

More summaries and resources for teaching or studying The Wild Robot Escapes.