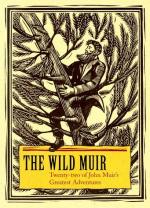 John Muir
This Study Guide consists of approximately 23 pages of chapter summaries, quotes, character analysis, themes, and more - everything you need to sharpen your knowledge of The Wild Muir.

This detailed literature summary also contains Topics for Discussion and a Free Quiz on The Wild Muir: Twenty-two of John Muir's Greatest Adventures by John Muir.

John Muir is a Scottish-born American mountaineer, author, naturalist, and early conservation advocate. Muir spends most of his life living in the Sierra Nevada mountains in California, where he engages in a number of athletic feats that are so extraordinary that many have doubted their veracity. Muir takes copious journal notes during his travels which later evolve into widely read essays, a large number of letters, and over a dozen books. In the late 19th century and early 20th century, millions of Americans read his books and essays.

Muir's efforts led to the creation of the Sequoia National Park and Yosemite National Park which he encourages by lobbying Congress to pass the National Park Bill. He pursues later conservation efforts by taking Presidents Theodore Roosevelt and Taft on hikes. He founds the Sierra Club and serves as its first president up to his death.

The Wild Muir is a compilation of twenty-two of Muir's essays and letters that span the period from his childhood up to his last few excursions. Most of the essays are tied to Muir's extraordinary achievements and his rather nonchalant descriptions of them. Muir's physical strength must have been incredible if the reports of the Presbyterian Minister whose life he saves by pulling him up a mountain ledge with his teeth are to be believed.

Muir seems wholly unafraid of activities that would terrify any ordinary human being, such as charging grizzly bears to see how they run. In some stories, Muir comes almost to death but this is unclear from his own descriptions and those of others. After days of terrible and often life-threatening conditions, Muir still has enough strength to save experienced hikers who accompany him.

Rather than focus on himself, Muir spends nearly all of his time describing the plants, animals, and geology of the areas he explores. His descriptions are far from mundane as he gives almost spiritual descriptions of nature and deliberately seeks out beautiful scenery. In fact, one reason that Minister Young's life needs saving is that he falls down a ledge while Muir is busy running around a mountain ledge to get the best view of the sunset. The book is full of descriptions of beautiful scenery high in the mountains, far away from any human life, except traders and American Indians.

The essays in The Wild Muir are short and are largely arranged chronologically. They tend to have themes that typically focus on the particular area that Muir is exploring. Muir is not out to make an ideological point, at least not directly in any event. Instead, he is simply interested in nature, natural beauty, exploration, and physical challenges for their own sake. The reader will find a stark disconnect between Muir's activities and his description of those activities which give rise to the nickname of "the wild Muir."