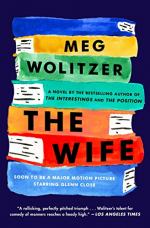 Get The Wife from Amazon.com
View the Study Pack
Study Guide
Order our The Wife Study Guide

Meg Wolitzer
This Study Guide consists of approximately 35 pages of chapter summaries, quotes, character analysis, themes, and more - everything you need to sharpen your knowledge of The Wife.

The Wife Summary & Study Guide includes comprehensive information and analysis to help you understand the book. This study guide contains the following sections:

This detailed literature summary also contains Quotes and a Free Quiz on The Wife by Meg Wolitzer .

The following version of this book was used to create this study guide: Wolitzer, Meg. The Wife. New York: Scribner, 2018. Copyright 2003.

The novel opens on an airplane heading to Helsinki, Finland from the United States. The protagonist and narrator, Joan Castleman, is on the plane with her husband, Joe Castleman. They are approaching old age. Joe has been named the recipient of the prestigious Helsinki Prize for Literature. During the flight, Joan decides to finally leave her husband. Joe is a serial philanderer, and Joan has always been fairly unhappy in the marriage. Joan and Joe had three children together, all of whom are now adults. Joan and Joe first met in 1956, when Joan was a 19-year-old student at Smith College. Joe, then in his twenties, was married and recently had a child. He was a creative writing professor, and Joan was in his class. Joe earnestly praised the literary talents that Joan displayed.

One day, a female writer named Elaine Mozell gave a reading at the college. In a private conversation with Joan, Elaine bemoaned the misogynistic nature of the male-dominated literary world. Elaine advised Joan that it was generally futile for a woman to try to succeed as a writer. Joan and Joe soon fell in love and began to have a sexual relationship. Joan read a story written by Joe and was disappointed to see that it was quite bad. Eventually, Joe left his wife, and he and Joan moved to New York City. Joan took a job as an assistant in a publishing house, while Joe focused on his writing. Joe’s first novel was entitled The Walnut and as heavily autobiographical. Joan gave it to her boss at the publishing house, who decided to publish it. The book received much acclaim, and Joe rose in literary renown throughout his career.

Joan quit her job at the publishing house and soon became pregnant with their first child. She did not pursue any literary projects of her own, as she did not want to risk Joe feeling threatened by her innate literary talents. Joan also often faced misogynistic words and attitudes from Joe’s male literary friends. Throughout Joe’s marriage to Joan, Joe repeatedly committed marital infidelities. Joan was aware of these infidelities, but she did not confront Joe, as she has was dependent on her and Joe’s relationship for a sense of stability. As Joe’s fame grew, so too did his ego and arrogance. Joe once engaged in a petty physical altercation with his friend Lev Bresner, who was also a famous and personally arrogant writer. After Joan and Joe arrive in Helsinki, they attend many events honoring Joe.

The narrative eventually reveals that all of Joe’s books were actually written by Joan. She had wanted Joe to succeed, but back in the 1950s it quickly became apparent to her that Joe had no actual talent. Thus, based on general story suggestions from Joe, Joan wrote all of Joe’s books throughout his career. Joe and Joan then deluded themselves into believing that Joe was still the true author of the books. In Helsinki, Joan tells Joe that she no longer wants to be in a marriage with him. She also threatens to tell everyone the truth about the authorship of his books. Joe goes into a frenzy and has a heart attack. Joe returns to the United States feeling a mixture of freedom and grief. For the moment, she decides not to tell anyone the truth about Joe’s books. She also begins to consider finally pursuing her own literary ambitions, even at this late stage in her life.

More summaries and resources for teaching or studying The Wife.

The Wife from BookRags. (c)2022 BookRags, Inc. All rights reserved.