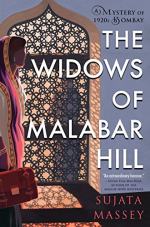 Sujata Massey
This Study Guide consists of approximately 41 pages of chapter summaries, quotes, character analysis, themes, and more - everything you need to sharpen your knowledge of The Widows of Malabar Hill.

The Widows of Malabar Hill Summary & Study Guide includes comprehensive information and analysis to help you understand the book. This study guide contains the following sections:

This detailed literature summary also contains Quotes and a Free Quiz on The Widows of Malabar Hill by Sujata Massey.

The following version of this book was used to create the guide: Massey, Sujata. The Widows of Malabar Hill. Soho Press, 2018.

The novel incorporates a murder mystery with the personal toils of Purveen Mistry, the first female layer in Bombay. The protagonist, Perveen, 23, works for her father’s law firm, Mistry House. One of their clients, Omar Farid, has recently passed away, and she must settle the estate. However, the estate’s trustee, Faisal Mukri, has informed the law firm that the three widows would like to donate their dowers, inheritances guaranteed them at marriage, to their wakf, best described as a trust that donates to a chosen charity while providing a small living allowance to the widows. Perveen is suspicious and wonders whether the women fully understand their intended action. Because the three Muslim women are in seclusion, Perveen is in the unique position of being the only lawyer in Bombay who can speak to these women alone.

Upon meeting with the three women, they proudly offer their dowers to the wakf. As Perveen discloses the legalities, however, each widow seems more reluctant to lose her personal treasures. Omar Farid has granted Razia, the first wife, control of the wakf. She is ready to contribute what she believes are several acres of swampland until she is told these acres were filled in and fabric factories were built upon them. Sakina, the second wife, is surprised to hear Razia was placed as administer of the wakf. When Perveen tells her the jewels she received as dowry could be saved to provide a suitable inheritance for her and her children, she begins to reconsider her donation. Mumtaz, the third wife, was married five months before Omar Farid’s death. She is from Falkland Road, an area known for prostitutes, music and opium. She, too, reconsiders her donation to the wakf when she learns she would have to give up her musical instruments.

The tyrannical Mr. Mukri, overhearing some of Perveen’s conversations with the widows, throws her out of the house and fires the law firm. Perveen mistakenly leaves her briefcase, and, upon return to the widow’s house, finds Mr. Mukri dead from stab wounds. The three widows and Amina, the eldest daughter, are under suspicion, and Perveen is called upon to question the widows concerning the murder. She finds Amina has disappeared. She begins to investigate the widow’s account of the events after she had left the home.

The novel oscillates between 1921, the current Farid case, and 1916, when Perveen meets Cyrus Sodawalla as a 19-year-old student in college. Cyrus Sodawalla is a 28-year-old man from Calcutta whose family owns bottling plants. They are visiting Bombay to find a suitable wife. Cyrus and Perveen are instantly attracted to each other. Instead of the usual chaperoned dates, however, Perveen and Cyrus meet up clandestinely, even at a beach where they hold hands, kiss, and even venture a touch of Perveen’s bare breast. They are soon married, despite her parents’, Jamshedji and Camellia, concerns of such a quick engagement. Now living in the Sodawalla home in Calcutta, Perveen finds her life with Cyrus passionately loving and the traditional life with her in-laws confining. She must endure hours of cooking lessons with her mother-in-law and long hours away from Cyrus who often works 15 hours a day. Most stressful, at the times of her menstrual cycle, Perveen must stay in a secluded room for fear of spreading disease to the other household members. The treatment reaches a limit when Perveen finds the in-laws have asked her parents to pay for a new bottling plant. She confronts Cyrus over this issue at his place of employment, and finds a prostitute in his office. Feeling betrayed and understanding this was how she contracted a venereal disease from Cyrus, they have a heated exchange. Cyrus punches Perveen twice in the face. Perveen returns to Bombay and eventually is granted a legal separation even though the law is stacked in Cyrus’ favor.

Perveen turns the failed marriage into an opportunity to complete her study of law at Oxford University. Because women are not allowed in trial court, Perveen handles the legal paperwork and background investigations into cases. Omar Farid’s estate begins as mere legal paper work and ends up being a murder case for Perveen to help solve. She finds enough evidence to release Moshen the widows’ house guard, who had been taken into custody for the murder. She amasses clues, endures dismissive inspectors, and survives a kidnapping. With the help of a friend, Alice, they find that the widow’s house has a secret passageway between the women and men’s quarters. Exploring this, she finds the missing Amina, drugged and held without food or water for days. Sakina enters the passageway and confesses to kidnapping Amina, having Perveen kidnapped, and the murder of Mr. Mukri. She is arrested and receives jail time. The remaining two widows decide to sell the Farid bungalow. Perveen meets with Cyrus in a hospital, and he is dying from syphilis. Their exchange is brief, and she leaves her past behind. Celebrating the end of the case, Perveen toasts with Alice “to the power of women” (375) at a lounge.

More summaries and resources for teaching or studying The Widows of Malabar Hill.

The Widows of Malabar Hill from BookRags. (c)2022 BookRags, Inc. All rights reserved.