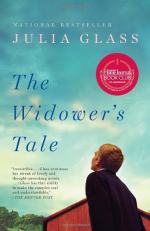 Julia Glass
This Study Guide consists of approximately 34 pages of chapter summaries, quotes, character analysis, themes, and more - everything you need to sharpen your knowledge of The Widower's Tale.

This detailed literature summary also contains Quotes and a Free Quiz on The Widower's Tale by Julia Glass.

Septuagenarian Percy Darling still grieves for his wife, Poppy, who drowned in their pond many years ago. Percy compares everything in his life today to the good life he shared with Poppy in the 1960s and 1970s. Percy raised their two daughter, Clover and Trudy, who were teenagers at the time of their mother's death. He tried to be a good father but marvels at how Trudy could become a respected oncologist while Clover ended up divorced without custody of her children and working in a pre-school now housed in the barn on his property. Percy is delighted with one family member, his grandson, Robert, a Harvard student with whom he has a close relationship.

Percy has a difficult time adjusting to the changes taking place in his community and the world at large but surprises everyone when he begins dating a much younger woman named Sarah who has a young boy named Rico. Sarah is a stained glass artist with a fiercely independent streak, so she baffles Percy when she unexpectedly marries a former boyfriend. Percy learns that she needs healthcare insurance because she has breast cancer and has married even though Percy offered to pay for her medical expenses.

Percy's world crashes even further when Robert faces charges related to a campus eco-terrorism act that destroyed Percy's house and the neighboring one in a huge fire. Robert is expelled and goes to live with Percy during his period of punishment and retribution. In spite of all his disappointments and heartaches, Percy's love pushes through and he will help Robert redeem himself and possibly even let Sarah back into his life.

More summaries and resources for teaching or studying The Widower's Tale.