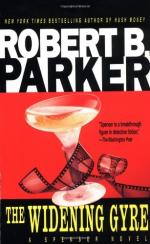 The Widening Gyre Topics for Discussion

Is Spenser more of an intellectual or a physical being?

How does Susan's absence from the first half of the novel impact Spenser?

Is Meade Alexander right to stand by his wife without dealing with her infidelity?

Who would you vote for: Robert Browne or Meade Alexander?

Is Joe Broz's decision to have Spenser killed made with emotional or intellectual logic? What about his decision to compromise?

Ronni Alexander is an absent character for the most part. Why does Parker exclude her from the narrative?

What role does the city of Boston play in the novel? What is Spenser's relationship with the city?