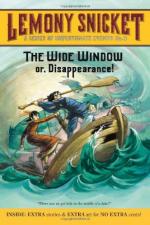 Lemony Snicket
This Study Guide consists of approximately 29 pages of chapter summaries, quotes, character analysis, themes, and more - everything you need to sharpen your knowledge of The Wide Window.

Captain Sham welcomes the four occupants of the sinking sailboat onto his boat. He reveals that he thought the children had died when Aunt Josephine's house collapsed, but his associate told him that they had stolen a boat. He has been out on the lake ever since, searching for them.

Although the Baudelaire children are happy that they did not join their boat at the bottom of Lake Lachrymose, they are back in a familiar predicament and completely at the mercy of their nemesis. Captain Sham is not pleased that Aunt Josephine faked her own death, particularly when the children tell him that she will tell Mr. Poe the truth about Captain Sham.

This enrages him and he reminds them that the no one else knows that Aunt Josephine is actually alive. He threatens to throw Aunt Josephine to the leeches and she...

More summaries and resources for teaching or studying The Wide Window.