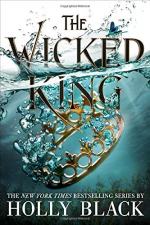 Holly Black
This Study Guide consists of approximately 63 pages of chapter summaries, quotes, character analysis, themes, and more - everything you need to sharpen your knowledge of The Wicked King.

This detailed literature summary also contains Quotes and a Free Quiz on The Wicked King by Holly Black.

Jude was a child living a typical life in the mortal world when a man arrived and killed her parents. The man was Madoc, the biological father of Jude's half-sister, Vivienne. Madoc was angry that Vivienne's mother took his daughter from Faerieland. Madoc accepted that his ex-wife's other children, though mortal, were also his responsibility, and he took Jude and her twin, Taryn, back to Faerieland as well. Their home was in the region known as Elfhame. Madoc raises Jude and Taryn as members of his family with all the advantages wealth could buy. When the old High King decided it was time to step down and pass the crown to one of his sons, both Madoc and Jude had plans involving the son adopted by Madoc's second wife. The boy, Oak, was young. Madoc planned to put Oak on the throne while Madoc held the real power. Knowing Madoc's cruelty, Jude manipulates Prince Cardan into taking the throne to give Oak time to grow into the role.

This novel of the series picks up some five months later. Oak is living in the mortal world with Vivienne and is guarded by trusted soldiers of Elfhame. Cardan is on the throne. However, by the agreement he made with Jude, he can do nothing without her direction. While Oak has accepted this phase of his life, Cardan is chafing under Jude's control even while his power as king grows. Jude has an official role as Cardan's seneschal, which is an adviser, and she is careful not to let anyone know about the deal she and Cardan made that keeps him under her control. She is also struggling to hide the sexual attraction she feels for Cardan and that he apparently feels in return, though each of them hates that situation. As Jude fights an increasingly volatile political and social climate, Cardan is growing into his role. This includes a heightened ability to commune with the land.

On the night of Taryn's marriage, Jude is lured to the seaside where Queen Orlagh of the Undersea arranges for Jude to be kidnapped by one of Jude's most trusted spies. She is held for a month and is horrified to discover that Cardan allowed Orlagh to attack one of the land provinces in return for Jude's release. Though weakened by the ordeal, she manages to return to Cardan's side. Cardan is poisoned by his brother, Balekin, and Jude manages to get the antidote but kills Balekin in the process. Cardan pledges to marry Jude if she will release him from their deal which keeps him in her control. Jude admits that being Queen of Elfhame means having more power than she ever imagined in this world, and Cardan agrees.

The next day, Orlagh summons Cardan for a meeting. Balekin was Orlagh's ambassador, and Orlagh demands revenge for Orlagh's death. Caught in a situation she cannot control, Jude admits that she killed Balekin. She expects Cardan to protect her, given that they shared marriage vows the previous night, but he banishes her to the mortal realm. As the novel comes to a close, Jude is living with Vivienne and Oak, though she is struggling through a deep depression.

More summaries and resources for teaching or studying The Wicked King.