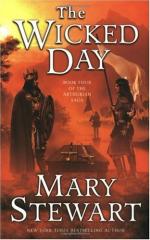 Mary Stewart
This Study Guide consists of approximately 38 pages of chapter summaries, quotes, character analysis, themes, and more - everything you need to sharpen your knowledge of The Wicked Day.

This detailed literature summary also contains Topics for Discussion and a Free Quiz on The Wicked Day by Mary Stewart.

Mordred is born in a time of turmoil, when his mother is very powerful and is causing rifts in the kingdom, especially between her half brother Arthur and her new husband King Lot. Lot orders a massacre of all infants in hopes of eliminating a problem between Lot and Arthur, but one child is saved. The child is Mordred, and Morgause, his mother, whisks him off to a poor fishing family on the Orkney Island. Over the years, she provides sustenance to the family on a limited scale, and almost forgets about Mordred until he is eleven and is instrumental in saving one of her other sons, Gawain.

Mordred is brought to live with the other princes, who are sons of Lot and Morgause, and led to believe he is the bastard son of Lot. Morgause sends her current lover, Gabran, to destroy all traces of Mordred's foster family so he is forced to be dependent upon her for the future. Morgause does not count on Mordred's inner strength, and the boy continually resists her attempts to manipulate him. Mordred joins the princes Gawain, Agravain, Gaheris and Gareth, but always feels as if he does not truly belong in their company. Gawain becomes his closest friend in the group.

When Mordred and the princes have lived together a few years and have been training to become leaders of kingdoms, a ship arrives with a messenger, and the boys learn that they and Queen Morgause have been called to Camelot. Morgause has been instrumental in the illness and near death of Merlin, Arthur's trusted advisor, and it is time to face the consequences of her behavior. Morgause believes this is a ruse to bring Mordred nearer to Arthur, as he has somehow learned of the boy's existence.

Mordred is confused by the summons, thinking Arthur is calling him to Camelot to punish him for some reason. During the journey, Mordred overhears Morgan and Morgause talking privately, and learns that he might be in danger. Mordred almost escapes the travelling party, but Nimue senses his presence and orders the guards to be especially vigilant. As a result, Mordred does not escape, but arrives at Camelot and is presented to King Arthur immediately upon their arrival.

King Arthur learns that night of Merlin's possible recovery and it is several months before Arthur once again speaks to Mordred. This time it is when Mordred kills Gabran, revealing him to be the killer of his foster parents. As Gabran dies, he implicates Morgause as well. That night, Mordred learns he is not Lot's son, but Arthur's, and his mother is not some peasant woman, but Morgause. Mordred also this night learns of the prediction by Merlin that Mordred will be the downfall and bane of Arthur.

In the years that follow, Mordred learns more about becoming a leader, and is favored by his father. Mordred falls in love with Guinevere, but knows that as long as Bedwyr and Arthur are still alive, she will never be able to love him. Mordred yearns for a throne of his own, but is willing to wait and see what the future brings. He and his father often talk about strategy, diplomacy, and their mutual respect for each other. Mordred is still bothered by the question of fate versus personal choice, and is greatly comforted by a conversation he has with Nimue, and then a trip to Merlin's home.

As the country faces difficulties from outside invasions and internal struggles, Mordred and Arthur keep the lines of communication open, and Mordred progresses towards ultimately replacing his father as High King of England. As Arthur turns over more and more responsibility, there is talk about an affair between Bedwyr and Guinevere, and one fateful night the Orkney princes lead a surprise visit to the Queen's bedchamber where it is known Bedwyr is with her. In the altercation, Gareth is killed, Gaheris is injured badly and Agravain is knocked out. Gawain is far away in Orkney, but Mordred was there, trying to defend the Queen from Gaheris' attack. Bedwyr misunderstands and when the attackers are cleared, he turns on Mordred and he is badly injured by Bedwyr.

Mordred believes himself to be hunted by Arthur, and when Gaheris uses him to escape the city and dumps Mordred at a monastery, Mordred uses the time to return to Orkney and lose himself as a fisherman. Years later he is discovered by Gawain, told the truth about the Queen defending him, and returns to the court of Camelot. Yet the turmoil continues, fueled by the Orkney princes, Mordred's doubts about fate stealing his future, Mordred's love of Guinevere, and more threats of invasions from surrounding countries.

Again Mordred is trusted as head of state while Arthur goes off with the army to fight a new threat. Separated and beset by rumors and a series of misunderstandings, the King and his son find themselves on the battlefield fighting each other. The prophecy of Merlin is fulfilled, and the two men cross swords, with Mordred losing his life.

More summaries and resources for teaching or studying The Wicked Day.