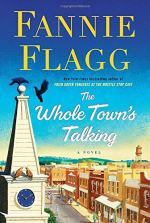 Plot Summary
+Chapters Summary and Analysis
Section 1: “And So It Begins…”
Section 2: “The 1900s, A New Era”
Section 3: “The Twenties, All the Wonderful Things in Store”
Section 4: “The Thirties, The Show Must Go On”
Section 5: “The Forties, The World Speeds Up”
Section 6: “The Fabulous Fifties, All this and Elvis, Too”
Section 7 and 8: “The Sixties, Something’s Blowing in the Wind” and “The Seventies, Saturday Night Fever”
Section 9 and 10: “The Eighties, The World Turns” and “The Nineties, Walmart and Supercuts”
Section 11: “New Millennium, The End of an Era” and “Epilogue”
Free Quiz
Characters
Symbols and Symbolism
Settings
Themes and Motifs
Styles
Quotes
Order our The Whole Town's Talking Study Guide

Fannie Flagg
This Study Guide consists of approximately 43 pages of chapter summaries, quotes, character analysis, themes, and more - everything you need to sharpen your knowledge of The Whole Town's Talking.

This detailed literature summary also contains Quotes and a Free Quiz on The Whole Town's Talking by Fannie Flagg.

The following version of the book was used to create this study guide: Flagg, Fannie. The Whole Town’s Talking. Penguin Random House LLC, 2016.

The novel starts with the founding of Elmwood Springs, Missouri, in 1890 by Lordor Nordstrom, a Swedish immigrant to the United States. The novel is divided into sections that detail what happens during each decade. The first part of the novel details Lordor’s life and the life of the first settlers of the town. They allocate a graveyard, Still Meadows, to bury their dead, and elect Lordor to be mayor. In this section, Lordor also puts an advertisement in a Chicago newspaper to find a wife. They correspond back and forth, and eventually Katrina moves to Elmwood Springs and they marry and have two children. Lordor becomes a successful dairy farmer and gives the dairy to his nephew-in-law, Ander Swensen.

Something strange happens to the members of this town who are buried at Still Meadows, when they die, they can talk to each other in the graveyard. They have many discussions about the town and other world events. Eventually, the souls do depart, but it is only revealed at the end of the novel that they are reincarnated into living things, crows, slugs, flowers, and other living things.

During the 1900s, the next generation grows up and fights in World War I and World War II, meanwhile the town gets larger and more developed, with the building of a water tower and other various additions to the downtown area. Beatrice Olsen (the niece of Katrina) married Ander Swensen (the man who owns Lordor Nordstrom’s dairy). Her best friend, Elner, married Will Shimfissle, and they buy a farm not too far away. Elner is a great comfort and neighbor to the town, she is also very outgoing and has had famous people stay at her farm, including notorious crooks Bonnie and Clyde, and President Eisenhower and his wife.

The town gets a shock during World War II, when Gene Nordstrom, Katrina’s grandson, dies in Japan. When he goes to Still Meadows, he is embraced by all others there, and it is happy occasion for him, even though it is a sad occasion for those mourning his premature death. This rattles the town a little bit, especially the younger generation that knew Gene.

Later, Ander and Beatrice are having a hard time getting pregnant, but eventually they have a daughter, Hanna Marie, who is deaf. Because they inherited the dairy, they are one of the wealthiest families in town, and they are able to give their daughter anything she wants. They send her to a school for the deaf in Boston, Massachusetts, and there, she meets a the man she will marry, Michael Vincent.

Hanna Marie and her husband live in the dairy farm with Hanna Marie’s parents. Ander feels that there is something wrong with his son-in-law, but he cannot tell why he feels that way. After Ander and his wife die, Michael becomes more aggressive in his want to take over the dairy farm and get all the money from the family. Michael has Hanna Marie murdered and has already changed her will with a lawyer to make sure that he gets all the money.

Hanna Marie, up at Still Meadows, finds that she is able to hear. When someone who dies after her, tells her about what happened to the dairy farm estate, she cannot understand why it is in Michael's possession. Eventually, after Elner has moved on from Still Meadows and becomes a crow, she leaves a message for the police chief to check on the situation (she tells him about a certain place that she knows there is a copy of the true will). The police follows through on this and Michael is sent to jail.

By the end of the novel, the town does not exist anymore. In the year 2020, there is no one left at Still Meadows, they have all moved on to become other parts of animals and living things.

More summaries and resources for teaching or studying The Whole Town's Talking.