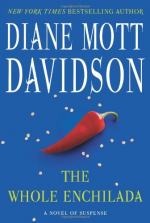 Diane Mott Davisdon
This Study Guide consists of approximately 87 pages of chapter summaries, quotes, character analysis, themes, and more - everything you need to sharpen your knowledge of The Whole Enchilada.

Most people were stunned by her death. Most. But not all.
-- Goldy Schulz (Prologue paragraph 8, Page 2)

Importance: In the short Prologue Goldy Schulz recounts how her friend Holly Ingleby died just a few moments after leaving a 17th birthday party that she (Goldy) had catered for Holly’s son Drew and her own son Arch. Although the initial indications are that Holly died as the result of a heart attack brought on by stressful events that had happened during the party, from the first Goldy believes that there might be something more sinister behind her friend’s death.

I thought about Holly, about her financial problems, about a recent break-in at this rental, about haggling for a security system, about the price of real estate, any real estate, in that phenomenally expensive part of Denver: Cherry Hill. I said, “None of this makes sense to me.
-- Goldy Schulz (Chapter 5 paragraph 4, Page 57)

Importance: After Holly’s death, Goldy and several other people accompany...

More summaries and resources for teaching or studying The Whole Enchilada.