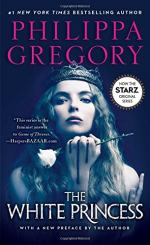 Philippa Gregory
This Study Guide consists of approximately 56 pages of chapter summaries, quotes, character analysis, themes, and more - everything you need to sharpen your knowledge of The White Princess.

This detailed literature summary also contains Quotes and a Free Quiz on The White Princess by Philippa Gregory.

The following version of this book was used to create this study guide: Gregory, Philippa. The White Princess. Pocket Books, 2013. Mass Market.

After the death of King Richard of York, a heartbroken Elizabeth is forced to marry the new king Henry to secure the safety of her family. Henry proceeds to rape her, telling her that they will only marry if she can bear him a child. She conceives and he promises to give her a coronation after the baby is born. She gives birth to a boy they name Arthur and Elizabeth is given the title of Queen of England. However, Henry’s rule is becoming tumultuous as rumors of a York heir spark widespread revolt against him. In fear for his safety, he locks Elizabeth’s cousin Teddie in the tower of London, claiming it is for the young boy’s protection. Elizabeth begs him to free Teddie, as the tower is where her two brothers Richard and Edward had died.

Over the course of many years, Henry’s rule becomes more unstable. News of a pretender prince worries Henry as all of the York heirs were proclaimed dead. The rebels call for Teddie and claim that he has escaped the tower. Even when Henry parades Teddie around the city, the rumors do not stop. Finally they capture the pretender prince and learn his name is Lambert. The King is merciful to Lambert, but promises to punish the people who taught him.

Despite Lambert’s capture and reformation, there are rumors of another pretender prince. This time, the prince is from France and calls himself Richard. Elizabeth has two more children, Margaret and Henry, as the rebellion continues in England. Henry goes to war against France and the latter asks for a peace treaty, agreeing to hand over the pretender prince. However, the prince escapes France.

Meanwhile, Henry and Elizabeth learn that her mother has been secretly providing money and correspondence to a fake prince. He sends her to the Bermondsey Abbey. Elizabeth confronts her and reveals that she and her mother sent Richard away to safety instead of sending him into the tower. She tells Elizabeth to follow her wedding vows so that she will be protected no matter who wins. Elizabeth returns to Henry and denies learning anything from her mother. Paranoia grips the castle as everyone is being watched by Henry. He raises taxes and punishes criminals more harshly. Elizabeth has a third child she names Elizabeth after the death of her mother.

Then, the men of Cornwall revolt against Henry, but are defeated. Henry taxes them heavily and executes many men. Scotland then agrees to hand over the Boy, but he disappears again. The boy arrives in Cornwall where Henry has lost all support after the rebellion. The boy is then captured in surrender. However, Henry gives him the name Perkin Warbeck and allows him to live in the castle. Elizabeth believes Perkin is her long lost brother Richard. Henry then falls in love with Warbeck’s wife, threatening his relationship with Elizabeth. However, when Warbeck escapes, he is recaptured and locked in the tower. Henry tricks Warbeck and Teddie - the latter having been in the tower for 12 years - into agreeing to an escape plan. He executes them both, but shows regret as he begs Elizabeth to forgive him. She says she does.

More summaries and resources for teaching or studying The White Princess.