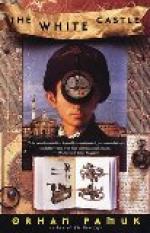 This Study Guide consists of approximately 55 pages of chapter summaries, quotes, character analysis, themes, and more - everything you need to sharpen your knowledge of The White Castle.

This detailed literature summary also contains Quotes and a Free Quiz on The White Castle by .

The following version of this book was used to create this study guide: Pamuk, Orhan. The White Castle. George Braziller, 1985.

Orhan Pamuk's third novel, The White Castle, begins with a frame story in which the author of the preface, Faruk Darvinoğlu, claims he has found a seventeenth-century manuscript in the governor's forgotten archive in Istanbul. Pamuk uses many techniques of narrative fiction, in addition to the story within a story, such as the doppelgänger motif, and he alludes to specific classics, such as Don Quixote and The Decameron. In addition, he refers to recent historical events, directly or indirectly, conflating fact with fiction. Thus, his novel can be understood as a sophisticated puzzle for a connoisseur of the novel genre, as well as an implicit commentary on modern Turkey.

The narrator of the manuscript story, a young Venetian student from a well-to-do family, is sailing on a ship from Venice to Naples. Surprised by a Turkish fleet that emerged from dense fog, his ship's captain hesitates to act, permitting the Turks to capture the ship. In a matter of minutes, a reversal of roles takes place: the Turks take control of the ship and the Europeans become their slaves. Gradually, the Italian manages to convince the Turks that he is a doctor and by successfully treating the pasha, he wins his favor. One day while waiting to see the pasha, he meets his mirror-image, his doppelgänger, or look-alike, named Hoja, meaning master. The Italian becomes Hoja's personal slave and is released from prison into his custody. The pasha instructs the two of them to work together to create a stupendous firework display for his son's wedding to the grand vizier's daughter. The fireworks are a smashing, if somewhat disturbing, success and the two continue to collaborate on projects like brothers.

In the relationship between the look-alikes, East meets West: each learns the native language of the other and they each educate their counterpart in their native cultures. Their first collaborations result in a movable model of the cosmos and a clock which only the nine-year-old sovereign (the historical figure Mehmet IV [1648-1687]) takes much interest in. Hoja takes all the credit for these accomplishments as if the narrator did not exist. Hoja wins the favor of the sultan on an amusing hunting expedition during which the sultan saves the life of an exceptional little white rabbit and Hoja interprets the rabbit's bizarre actions for him. Shortly thereafter, the sovereign's grandmother plots to kill him and replace him with his brother, but the plot fails and the sultan survives, fulfilling Hoja's interpretation of the rabbit's actions. The grateful sultan grants Hoja a piece of productive land. In the meantime, the narrator's longing for home clashes with Hoja's obliviousness to his desires, and the two oppose each other at the same time as they explore their personal identities.

Because the Ottoman Empire failed to modernize their weaponry, the sultan asks the two to build a new weapon. Subsequently, Hoja spends most of his time working on the “machine of war” which turns out to be a boondoggle, while the narrator forms a closer bond with the sultan, educating him and telling him stories. When the sultan calls on the two of them to join the war effort against the Poles and to bring their terrifying weapon with them, they travel to the sultan's home in Edirne. There the narrator visits Hoja's family house with him, then returns alone a few days later in order to find the path to the hospital where Hoja's grandfather used to tell him stories. On the war front, Hoja begins inexplicably cruel interrogations of innocent Christian and Muslim villagers and tries to get the last words of dying soldiers. He appears to be searching for some kind of absolute, but inaccessible truth that the vision of the white castle embodies.

When the time comes for the war machine to save the day, it fails miserably. After a heavy rainstorm, the contraption gets stuck in the mud, and it crushes the men operating it without so much as touching the enemy. The other soldiers and the pashas are furious, placing the look-alikes in grave danger unless, somehow, the capture of the white castle can save them. That is when they first catch a glimpse of the awesome fortification: the white castle on top of the hill, gleaming pure white with flags flying from its towers. The look-alikes know instantly that they will never be able to take it. They quickly exchange clothes, while the narrator reminds Hoja of the details about his family in Venice, enabling Hoja to save his life by becoming the Venetian narrator. Hoja then disappears into the fog, similar to the fog out of which the Turkish fleet suddenly emerged at the beginning of the novel. The sovereign saves the narrator's life, who assumes Hoja's position as imperial astrologer until the sultan's dethronement, after which he lives as a writer in Gebze.

More summaries and resources for teaching or studying The White Castle.