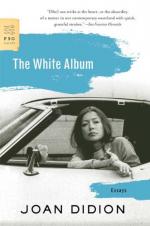 This detailed literature summary also contains Topics for Discussion on The White Album by Joan Didion.

In this collection of essays by Joan Didion entitled "The White Album", the reader is taken on a crash tour of the late Sixties and early Seventies, as seen though the eyes of the reporter Didion. The book is composed of selected pieces of her essays and articles published at that time, and examines the themes of the American Dream, Celebrity, and the chaos of the Sixties in general. "The White Album" studies American culture obliquely, through her essays on various places, events and personalities that she meets.

It is divided into five Parts, the first self-titled "The White Album" ranging through 'The Californian Republic', the 'Women's Movement', 'Sojourns' and finally 'The Morning After The Sixties.' Each of these sections contains a number of essays relevant to the theme, and we see emerging the prevalence for Didion to understand the nature of California (also her home state) and its impact of Hollywood on the American psyche and in turn, the rest of the world. Also, Didion discusses the early Women's Movement and how, facets of it in her mind too became a part of the American dream during those years, before finally turning her attentions to great American past times; that of traveling, the 'road trip' or going to the Mall, the dream of the holiday on a private beach in Honolulu as well as the dream of Celebrity and fame.

All of these essays, directly or indirectly, ask the question 'What is Wrong With Society?' Although she finds no concrete answers to her questions, Didion finds interesting clues; her study of the Getty Museum and the Governor of California's Mansion reveals in one part a sensibility that ennobles the Wild West, the free and the Working Class, whilst another desire tends to the fantasy land of Hollywood, of getting everything that one wants. Didion also sees that overlaying everything during these years is rhetoric. As in her very first essay she reveals her opinion that the whole world is made up of stories, and that we must pick the appropriate facts to make sense out of the confusion of life, she sees everywhere about her different narrative stories which are sometimes completely contradictory with each other; the Marxist revolutionary rhetoric of the Black Panthers, the 50's 'Nuclear' sensibilities of the Jaycee club, the apocalyptic nihilism of Jim Morrison, to the religious fervor of James Pike, first Bishop of California.

These essays do not provide answers to the questions raised by the Sixties, but they do paint a picture of those times, and of the sorts of people who lived there. Particularly in Didion's analysis of Hollywood and the Mall we can see clearly the foundations of our own contemporary western culture, with its own predominant consumerism.

Through all of these essays Didion also presents herself up for the examination of the reader in a uniquely post-modern style of her times. She is at one and the same time a vulnerable figure and a cynic, who talks about her own afflictions, emotional troubles and reconciliation's as a microcosm of her own times.