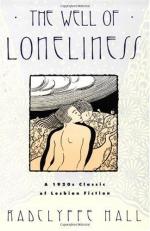 Radclyffe Hall
This Study Guide consists of approximately 40 pages of chapter summaries, quotes, character analysis, themes, and more - everything you need to sharpen your knowledge of The Well of Loneliness.

The Well of Loneliness Summary & Study Guide includes comprehensive information and analysis to help you understand the book. This study guide contains the following sections:

This detailed literature summary also contains Topics for Discussion and a Free Quiz on The Well of Loneliness by Radclyffe Hall.

The Well of Loneliness by Radclyffe Hall is a controversial novel that was banned at the time of its publication in 1928. The novel is about Stephen Gordon, a young Englishwoman who is a lesbian, in a time when acceptance of this lifestyle was non-existent. Stephen grows up unaware that there is a name for the oddities in her behaviors and emotions. Stephen's father understands, but is unable to find a way to explain what he knows to Stephen or her mother. When Stephen's father dies, Stephen is truly alone with her confusion, becoming involved in a love affair that will make her mother aware of what she is, causing an irreparable rift in their relationship. On her own, Stephen will find there are others out there like herself, even take a lover who gives her the happiness she thought she would never find, but the continuing lack of acceptance in society eventually takes all from Stephen, leaving her lost in a well of loneliness. The Well of Loneliness is a novel long before its time that is filled with the courage and strength its author had to have to put her story to paper.

Stephen Gordon has her first crush at seven. It does not occur to Stephen that there is anything unusual about having a crush on a woman until she catches the object of her affection kissing a man. Stephen turns to her father for understanding. Sir Philip, in turn, turns to the popular psychological writers of the time to learn what kind of future lies ahead for his unusual daughter. Sir Philip studies these books, but he finds it impossible to share what he has learned with either Stephen or her mother, Lady Anna. Instead, Sir Philip throws himself into caring for Stephen, teaching her to hunt and to care for the property around their home, Morton, and for the lonely future she is bound to suffer. This devotion on Sir Philip's part causes tension in his marriage that he refuses to alleviate with the truth for fear that his wife will not understand.

When Stephen turns seventeen, well educated and preparing for Oxford, her mother forces her to accept the social duties expected of a young woman of her social stature. Stephen hates the parties, hates small talk and dressing up in fancy clothes. Stephen would rather dress like her father, in suits and ties. Talking to people is torment for Stephen, who has no interest in the things women discuss and no place in the discussions of men. However, Stephen meets a young man, Martin Hallam, who is interested in what she has to say. Over the course of one winter, Stephen and Martin become very close, spending nearly every day together exploring nature. Lady Anna allows herself to hope that this relationship will turn to marriage and create a normal life for her only child. However, the moment Martin declares his love for Stephen, she pushes him away.

After Martin's departure, Sir Philip becomes more resolute in his plans for Stephen. Unfortunately, before he can see to her education at Oxford, Sir Philip is crushed by a falling tree limb. Sir Philip attempts to tell his wife about Stephen as he lies dying, but death comes too quickly. Lady Anna is devastated by the death of her husband and becomes something of a recluse, allowing Stephen to run their home. For this reason, Stephen elects to remain at Morton rather than attend school at Oxford.

Sometime after her father's death, Stephen meets Angela Crossby, an actress from New York. Stephen falls head over heels for Angela and it appears that her love is returned. However, over time Stephen comes to the realization that she can never give Angela the respectability and the security she craves. Still Stephen hangs on, accepting whatever small morsels of love Angela is willing to give. Unfortunately, Stephen hangs on too closely and she is devastated to discover that Angela is having an affair with an old enemy of Stephen's, Roger Antrim. Blinded by emotion, Stephen writes a letter to Angela, expressing how deeply she feels for her. However, Angela is afraid Stephen will tell her husband about Roger, so instead Angela gives the letter to her husband claiming that she had tried to reform Stephen and Stephen misinterpreted her intentions. The husband sends this letter to Lady Anna, causing a rift between mother and daughter that will never be repaired.

Stephen is forced to leave Morton. For several years, Stephen lives in a small flat in London with Puddles, her former governess and companion. Stephen begins writing novels and has great success with the first, but finds that something is missing from the second. A friend and fellow writer suggests that Stephen needs to experience more life to improve her writing. Stephen sets out for Paris with the intention of meeting a few of her friend's acquaintances. Instead, Stephen finds herself buying a house and remaining in Paris. After reconnecting with an old teacher and settling into her new home, Stephen turns her attention to writing her third novel. However, World War I breaks out before she is finished. Stephen immediately returns to London to help however she can in the war effort.

Stephen joins the French Army Ambulance Corp and begins transporting soldiers from the front lines to hospitals throughout the countryside. During this time, Stephen becomes close to her fellow drivers, especially a young Welch girl named Mary Llewellyn. After the war, Stephen takes Mary away on a vacation to help her heal from the stress of the war. Stephen has no intention of becoming involved with Mary, afraid of the stigma a relationship with Stephen would place on Mary in society. However, Mary convinces Stephen she understands and is strong enough to handle it. The first few months they are together are the happiest Stephen has ever known.

As time passes, Stephen returns to her writing, leaving Mary without an occupation to fill her days. When Stephen notices Mary's unhappiness, she begins taking her to parties at the home of Valerie Seymour, a lesbian living in Paris. Through Valerie, Mary and Stephen meet a great many more people like themselves. Mary befriends one couple in particular, two women from a small village in the Highlands. Over time, Mary and Stephen become close to Jamie and Barbara, often inviting them over for meals and helping to pay their bills. Jamie is proud, however, and refuses the offer of money even when Barbara becomes sick. One night Barbara becomes quite ill, suffering from double pneumonia. When Barbara dies, Jamie is devastated. Jamie kills herself.

Mary does not handle the deaths of Barbara and Jamie well. This, on top of the social ostracization of a friend Mary had thought admired them greatly, causes Mary to struggle with her acceptance of the prejudice against people like herself and Stephen. At this time, Martin Hallam returns to Stephen's life, becoming friendly with both she and Mary. Eventually, Martin falls in love with Mary and tries to leave in order to protect Stephen from the pain of such a union. However, Stephen invites Martin to attempt to steal Mary away, sure that Mary will choose Stephen. When Mary does choose Stephen, Stephen begins to see that this might not be the right choice for her. Stephen lies to Mary, convincing her that their love affair is over and sending her into the arms of Martin.

The Well of Loneliness from BookRags. (c)2022 BookRags, Inc. All rights reserved.