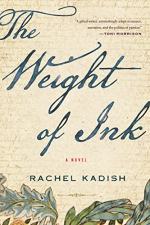 Kadish, Rachel
This Study Guide consists of approximately 185 pages of chapter summaries, quotes, character analysis, themes, and more - everything you need to sharpen your knowledge of The Weight of Ink.

The Weight of Ink Summary & Study Guide includes comprehensive information and analysis to help you understand the book. This study guide contains the following sections:

This detailed literature summary also contains Quotes and a Free Quiz on The Weight of Ink by Kadish, Rachel.

In 1691, an unknown narrator in Richmond admits to having lied, and wishes to begin anew. The writer, believing no one will read his/her words, seeks to pay tribute to a man who has been betrayed.

Helen Watt, a British professor of Jewish Studies, has been called to the house of a former student. Ian Easton has discovered 300-year-old documents hidden within the staircase of his manor in Richmond. Helen and graduate student Aaron Levy have three days to work on the documents before they are taken to be assessed. The professor is terse and abrupt with Aaron, and he has the impression that she regrets his inclusion in the project.

Helen and the graduate student begin examining the letters of Rabbi HaCoen Mendes. Aaron nicknames the unknown scribe of the blind rabbi Aleph, meaning initials. During the rabbi’s time, the manor had been owned by the wealthy HaLevy family, who had been Portuguese Jews. After reviewing several documents, the professor and Aaron learn that Aleph was a woman.

Ester searches the docks for her brother Isaac, who refuses to resume his duties as scribe. Several weeks later, the rabbi's housemaid Rivka informs her that Isaac has been killed after provoking a fight. Ester becomes the rabbi’s scribe, awakening a powerful thirst for knowledge.

In 2000, Helen and Aaron discover the forbidden words of Spinoza written on a page; indicating the rabbi or Aleph may have crossed paths with the philosopher prior to his published works. Helen recalls her volunteer trip to Israel in 1954. She had fallen in love with Dror, a soldier in the Israeli army who had survived the Holocaust. After learning that Dror would spend the rest of his life in Israeli intelligence, Helen had left him.

Ester begins to read books in other languages and schools of thought; the rabbi warns her not to share this with anyone. Ester is now the companion of the wealthy Mary da Costa Mendes, whom she reveals a family secret to: Ester’s mother, Constantina, had been conceived from an affair between Ester’s grandmother and a married Englishman. Constantina had been resentful of her true father throughout her life, for not having reunited with herself and her mother before his death.

In 2000, Helen and Aaron are now in competition with Wilton and his graduate students, and a race begins to analyze the documents. Aaron translates cross-written text in Aleph’s writing that he believes to be a coded message. Helen and Aaron have a heated conflict over the documents, and Aaron believes he has destroyed his career prospects. Helen is told by her doctor that she must accept her Parkinson's diagnosis. Upon returning to the manuscripts room, Helen finds a new comfort in her relationship with Aaron.

Ester and Mary attend the theater. On the way home, the da Costa Mendes coach is stopped by a crowd in the streets; they see that Alvaro HaLevy has been discovered as a homosexual. Seeing the rabbi lonely and despairing, Ester fabricates a Sabbatean crisis in Florence so that the rabbi may write to his former pupil. Ester begins writing under the pen name Thomas Farrow and Mary begins an affair with the real Thomas Farrow. Ester learns that Manuel HaLevy is her unnamed suitor, and refuses his proposal of marriage.

In 2000, Helen and Aaron examine a document in which Aleph signs her name as Ester Velasquez and Thos. Farrow. Aaron intentionally damages the document so that it must be taken to the conservation room, thus delaying Wilton’s group's access to it; Helen and Aaron bond over this conspiratorial move.

John, Thomas, Ester and Mary visit the countryside and Ester has her first experience of England outside of the city. They have a near-death experience on the river when Thomas tries to intentionally crash their boat, and Mary tells Ester she is pregnant with his child.

Wilton publishes a rushed article on the Sabbatean crisis in Florence. Aaron’s research indicates that Ester married Manuel HaLevy during the Great Fire of London. Aaron visits the manor in Richmond and himself and Bridgette Easton sleep together, which he immediately regrets.

Prior to his death, the rabbi tells Ester he knows she has been writing without his consent. Thousands are fleeing the plague in London. The man Ester is in love with, John, begs her to leave with him; she initiates sex to demonstrate her loyalty. Ester learns that Thomas’ friend Bescós painted a white cross on Mary’s door to trap her in the house; he plans to wait for her to die of hunger or plague before stealing her family’s wealth. Ester devises a plan to move herself and Rivka into the da Costa Mendes home to wait out the plague with Mary.

Mary leaves the house against Rivka's urgings, and dies of plague a few days later. Ester also contracts the plague and survives. Ester and Rivka are quarantined for forty days. Bescós assembles a mob against them, convincing the crowd that Ester and Rivka practice Jewish sorcery. The women are led to a parish, where they are baptized into the Church of England. Ester and Rivka leave the city and are housed in the HaLevy manor in Richmond.

The final document released by the university is a poem written about Alvaro, which indicates he had not destroyed the writings of his wife Ester as he had promised before her death. Helen and Aaron discover Ester's second set of documents and the professor purchases them from Bridgette for £20,000. After reading Ester’s final letter, Helen writes a letter to Dror, who had died four years before.

Two days later, Aaron and Patricia find Helen passed away in her bed. Aaron has inherited the documents from Helen. Ester’s final letter reveals the possibility of Ester’s grandmother having been Shakespeare’s Dark Lady.

In the novel’s final chapter, Ester and Alvaro are at the river by the HaLevy manor in 1667. Ester is overcome with emotion for her circumstances as Alvaro holds her in the water.

More summaries and resources for teaching or studying The Weight of Ink.

The Weight of Ink from BookRags. (c)2022 BookRags, Inc. All rights reserved.