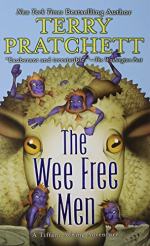 Terry Pratchett
This Study Guide consists of approximately 41 pages of chapter summaries, quotes, character analysis, themes, and more - everything you need to sharpen your knowledge of The Wee Free Men.

This detailed literature summary also contains Quotes and a Free Quiz on The Wee Free Men by Terry Pratchett.

NOTE: Citations in this Study Guide refer to the following version of the novel: The Wee Free Men. Kindle version, published by HarpersCollins; Reprint edition (October 6, 2009).

The Wee Free Men is a young adult comic fantasy novel exploring themes of magic, coming-of-age, and learning. The narrative is related in the third-person, from an omniscient narrator whose focus lay primarily on the perspective of protagonist Tiffany Aching.

In the opening of the novel, a witch called Miss Tick used a self-made device in order to receive messages, one of them being that a witch lived nearby. She did not think this was possible because no witch could grow on chalk but she decided to investigate anyway.

Tiffany Aching played by the river with her brother Wentworth when she saw two little men warning her that a creature was coming. A figure emerged from the water and Tiffany grabbed her brother and ran away. Miss Tick observed Tiffany from a distance and was surprised she had not been more scared of the creature.

Tiffany worked as a dairymaid and her family had been on the Home Farm for generations despite it being owned by the Baron. She explored Granny Aching's library which contained mostly books on sheep but also Tiffany's fairy tale book and a book of flowers once belonging to Granny Aching. Later she used her brother to lure the creature in the water back out and then hit it with a frying pan. Voices nearby said they had found their "hag," who was Tiffany.

Tiffany was told by her mother that she could go for a lesson with the traveling teachers who moved from place to place trading goods for knowledge, and Tiffany made use of them whenever possible. She asked a teacher about the creature she saw and was pointed towards Miss Tick.

Tiffany asked Miss Tick if she was a witch, and both Miss Tick and the toad she carried began talking. Miss Tick asked how Tiffany had fought off the creature in the water and Tiffany said she wanted to be a witch, or rather just like Granny Aching who always watched and listened. Tiffany thought that Granny Aching was a witch as she once brought a dead lamb back to life but Miss Tick said this was not magic. Miss Tick told Tiffany about a special school for witches and gave some advice before Tiffany headed home.

Tiffany remembered herding sheep with Granny Aching and marveling at her skills, and awoke to hear voices moving around the room and talking about her. She went to look at her fairy tale book and found the stories to be very unrealistic now. Tiffany then saw a ram being lifted up and carried away in the field and then went out to the hen house to find small men trying to steal eggs. She ordered them to put them back and they ran away. She shouted into the field for the men to return the ram.

Tiffany kept seeing and hearing strange things while doing her chores and found that she was actually being helped with them. She walked down to the village when snow appeared everywhere, along with a headless figure on a horse. She was told to stand her ground and the little men drove the figure away, and then it turned into summer again.

Tiffany found the toad in the village and he told her that the small men were Nac Mac Feegles, calling themselves the Wee Free Men. The toad said trouble was coming but Tiffany was sure that there was something that she would be able to do.

Tiffany's mother told her that Wentworth was missing, and Tiffany went to the toad, thinking that he might know who had taken him. He told her to retrieve the liquor which people in the family sometimes drank and to leave it for the Nac Mac Feegles. They all emerged and admitted to stealing the sheep, and then Tiffany asked if they could help her find her brother. They told her about the Queen, or the Quin, who was likely to have taken Wentworth. The Nac Mac Feegles and Tiffany reached an agreement where she would help their clan if they helped find her brother.

Tiffany was carried to a field where Granny Aching's house used to be, where they stopped and waited for another Nac Mac Feegle. She found Granny Aching's tobacco wrapper and kept it, and the Nac Mac Feegle told her that he had seen the Queen taking her brother. One of the Nac Mac Feegles, Rob Anybody, told her that there were far more monsters waiting in the land where they had to go, and then snow suddenly appeared again and they were ambushed by dogs. They were able to fight back when they reached a place where it was still green.

Rob Anybody told Tiffany that the clan was all dead and that this was their afterlife. They moved onto the Nac Mac Feegle home which was full of other tiny people. Tiffany was taken to see the Kelda, who was the only female among the Nac Mac Feegles and who took care of and ruled them.

Tiffany was told by William the gonnagle that they had once served the Queen until she tricked them and they rebelled. Tiffany wrote a note and asked Hamish to send it to her parents, and then was told by the Nac Mac Feegles that she would have to marry one of them. She picked Rob Anybody and picked a date so far in the future that it would never come to pass. William the gonnagle accompanied Tiffany to try to find the door to the other world but would not help her. She eventually found the door and entered the land of the Queen.

Tiffany and the Nac Mac Feegles entered the place called Fairyland and were ambushed by more dogs, which William the gonnagle took down by playing the mousepipes, making them run away. Rob Anybody explained how the Queen stole parts of other worlds to keep in this one, and soon Tiffany found herself in a dream of being back home. She was about to have some porridge when the Nac Mac Feegles burst in and told her not to—that it would keep her trapped in the dream. They told her that something called a drome was placed in dreams to trick people.

One of the Nac Mac Feegles was struck by the muse and was now reciting poetry, having been bitten by flying creatures. A boy on a horse appeared, who Tiffany recognized as Roland, the Baron's son, and then they found themselves in another dream. Tiffany started looking for the drome, which she found was disguising itself as Roland. She found out that the Nac Mac Feegles were still trapped in the dream but that she had to keep moving on.

Tiffany ended up back in a summer scene again which reminded her of a picture which had been in her family for a long time. Roland told her that he had ended up in Fairyland by accident, and that the Queen had told him to act like a young child. Tiffany saw Wentworth surrounded by sweets and went to pick him up, and then the Queen appeared. The Queen questioned why Tiffany wanted her brother back, which reminded Tiffany of a time when an old woman was accused of stealing a baby whom Granny Aching stood up for. Tiffany tried to tackle the Queen and run away but she could not get far, then she heard the Nac Mac Feegles again.

Tiffany told the Queen that she had very little power, realizing that all she could do was control dreams, and then the Nac Mac Feegles started fighting everyone. They all started running away chased by nightmares sent by the Queen and they found that their footprints leading them home were gone. They found themselves surrounded by sand and sea, by a lighthouse. They went on a boat and out to sea, and Tiffany recognized the scene as being the wrapper for the Jolly Sailor tobacco which Granny Aching used to smoke. A whale appeared and started chasing them and they got away just in time. They reached the shore and found shipwrecks which the Nac Mac Feegles thought contained treasure. Tiffany realized this was a trap and as the tide came in, and she grabbed Roland and went to the lighthouse and then to the doorway back home, but was stopped by the Queen.

The Queen began to apply guilt to Tiffany, telling her she did not really care for her brother, and Tiffany entered more dreams. She gained a sense of time and Granny Aching appeared to her, sending her two sheepdogs to herd away the storm. The toad and Nac Mac Feegles appeared again and the Queen summoned her lawyers to condemn the Nac Mac Feegles, but the toad was also a lawyer and defended them. Tiffany told the Queen that she would not keep dreaming but would wake up and warned her to stay away. She found herself back home again.

Tiffany told Roland to take Wentworth home, and then she was visited by three witches: Miss Tick, Mrs. Ogg, and Miss Weatherwax. Miss Weatherwax was very authoritative but admiring of Tiffany, and told her that she would soon be ready for the special school for witches but that she would also need to keep learning skills to support herself. The witches left and Tiffany's father appeared to take her home.

Tiffany listened as her parents and the Baron were in the next room trying to make sense of what had happened, deciding that Roland had been the hero. Tiffany was helped in her chores by Wentworth, and then Roland appeared telling her his side of the story. Tiffany told him never to talk about it to anyone, and returned to her chores again.

More summaries and resources for teaching or studying The Wee Free Men.