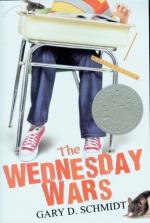 This detailed literature summary also contains Topics for Discussion on The Wednesday Wars by Gary Schmidt.

The Wednesday Wars by Gary D. Schmidt is a coming of age story about a young man, Holling Hoodhood, who learns over the course of his seventh grade year that there is more to life than what he sees in his own world. With the help of a strict but caring teacher, Mrs. Baker, his flower child sister, Heather, a host of friends and heroes, and even Shakespeare, Hoodhood learns lessons about discrimination, becoming an adult, war, and determining one's own destiny.

Holling Hoodhood is a young man beginning seventh grade in a small suburb on Long Island in New York. His life is filled with worries about the family architectural business, friends, and immediate threats from older classmates. He doesn't realize the other dangers in the world in 1967, including the Vietnam war, discrimination, and the pain and suffering of those around him.

Hoodhood, who believes his teacher Mrs. Baker hates him, is forced to spend each Wednesday afternoon in class alone while his classmates, Catholic and Jewish, attend religious instruction. Hoodhood, a Presbyterian, is instead asked to do chores. Over time, however, Mrs. Baker sees in Hoodhood the spark of brilliance, and she begins teaching him Shakespeare. Through the words of Shakespeare, Hoodhood begins to understand there is more to the world than he initially realized.

At home, his sister is slowly changing her political views and begins to align herself against the Vietnam war, much to her father's dismay. Father is primarily concerned about his business and his standing in the community, and Hoodhood knows he is to follow in his father's footsteps. In school, Hoodhood begins to see discrimination as a classmate, a recent refugee from Vietnam, is tormented not only by classmates, but by teachers who have lost loved ones in the war. Hoodhood himself feels discrimination as he is denied an autograph from Mickey Mantle due to how he looks, and he begins to understand that the world is never fair, and often cruel. Although Mrs. Baker does try to make things better for Hoodhood, even she is down as her husband is missing in Vietnam.

When his sister leaves home to find herself, Hoodhood realizes his love for her, as well as understands her need to strike out on her own. He is able to relate his teachings back to the readings of Shakespeare, and he finally understands the true meaning behind Mrs. Baker's decision to teach him the plays. He learns to stand up for himself and those he cares about, and to find beauty and life whenever possible, in spite of the knowledge that war and death are prominent in the world. By the end of the novel, Hoodhood has learned that life is about compromise, and about finding your own destiny.