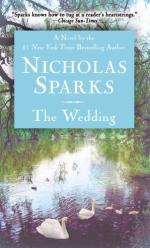 Nicholas Sparks (author)
This Study Guide consists of approximately 35 pages of chapter summaries, quotes, character analysis, themes, and more - everything you need to sharpen your knowledge of The Wedding.

The prologue begins with Wilson asking the question, "Is it possible, I wonder, for a man to truly change? Or do character and habit form the immovable boundaries of our lives?" Wilson identifies the catalyst to his renewed efforts to energize his relationship with his wife: he forgot their twenty-ninth anniversary. He sees this incident as the culmination of the many years he has taken his marriage for granted. While he loves Jane just as much as when they first married, he also recognizes that Jane may not feel the same way. Wilson presents the reader his story, relating the events and emotions of the previous fourteen months, beginning with the missed anniversary.

Chapter 1 explores the current state of Wilson and Jane's relationship. Wilson considers the personality differences of Jane, himself, and their three children, Anna, Joseph, and Leslie. He acknowledges that most of the child-rearing...

More summaries and resources for teaching or studying The Wedding.

The Wedding from BookRags. (c)2021 BookRags, Inc. All rights reserved.