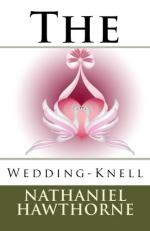 Nathaniel Hawthorne
This Study Guide consists of approximately 21 pages of chapter summaries, quotes, character analysis, themes, and more - everything you need to sharpen your knowledge of The Wedding-Knell.

The Wedding-Knell Summary & Study Guide includes comprehensive information and analysis to help you understand the book. This study guide contains the following sections:

This detailed literature summary also contains Quotes and a Free Quiz on The Wedding-Knell by Nathaniel Hawthorne.

An unnamed narrator tells the story. He was not present during the events of the story, but his grandmother was present as a little girl. She tells the story often. The story concerns a wedding that took place in a church in New York City. The bride and groom were both in their mid-sixties. The groom, Mr. Ellenwood, had been a scholar his whole life. However, his scholarly work had always been aimless. Many believed that his eccentricity was caused by a lack of purpose in life. The bride was Mrs. Dabney, who had been married twice before. Her first husband had been much older. The second husband had been unkind. Both husbands were deceased. Mrs. Dabney was in denial about her age. People believed that Mrs. Dabney had been more active than Ellenwood in forming their engagement. It seemed that Mrs. Dabney wanted to marry again because a wedding would make her feel young.

On the day of the wedding, Mrs. Dabney and the bridal party arrived at the church before Ellenwood. Mrs. Dabney was wearing a resplendent dress that did not seem to suit her advanced age. In addition, the members of the bridal party were all young people. When the bridal party entered, the church bell mysteriously began to toll with a deep solemnity associated with funeral knells. Mrs. Dabney did her best to ignore the bell. However, the feeling that her two dead husbands were calling out to her and asking her to join them in death struck her. Suddenly, Mr. Ellenwood and his wedding party arrived. His wedding party consisted of elderly people dressed in black like mourners. Ellenwood himself was dressed in a somber suit and was wearing a funeral shroud.

Ellenwood then said that the wedding should be like a funeral, as he and Mrs. Dabney were advanced in age. He said that he had been unhappy his whole life because Mrs. Dabney had married other men. He said that now, the only chance at happiness for him and Dabney was to marry and to greet the eternity of death together. He said that death would guarantee the eternity of their marital bond. Dabney, scared at first, suddenly accepted Ellenwood’s perspective. She accepted her own age and proximity to death. She finally accepted the inevitability of death, and she agreed to proceed with the wedding. As the wedding ceremony proceeded, the bell continued to toll darkly, but by the end of the ceremony, the cheerful playing of the church organ had drowned out the sound of the bell.

More summaries and resources for teaching or studying The Wedding-Knell.

The Wedding-Knell from BookRags. (c)2022 BookRags, Inc. All rights reserved.