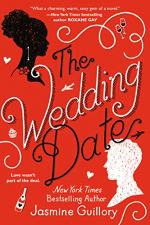 Jasmine Guillory
This Study Guide consists of approximately 42 pages of chapter summaries, quotes, character analysis, themes, and more - everything you need to sharpen your knowledge of The Wedding Date.

This detailed literature summary also contains Quotes and a Free Quiz on The Wedding Date by Jasmine Guillory.

The following version of this book was used to create this study guide: Guillory, Jasmine. The Wedding Date. Random House, 2018. Nook.

The third-person narrator first introduced the reader to Alexa Monroe. A plus-size black woman in her 20s who works as the mayor’s chief-of-staff, Alexa had a fabulous life. She loved her job, her home, her family, and her friends. However, she had never been lucky in love until she stepped into the Fairmont hotel elevator to meet her sister, Olivia, who had just made partner at her law firm. Before she arrived at Olivia’s floor, the hotel suffered a power-outage, and Alexa found herself stuck inside with an incredibly attractive doctor, Drew, who was staying at the hotel because he was a groomsman in his ex-girlfriend Molly’s wedding to his former friend Josh. Alexa and Drew chatted and flirted until the elevator started up, and then they went their separate ways. The narrator switched to Drew’s point-of-view, and Drew decided to ask Alexa, who he thought was attractive and charming, to go to the wedding with him. Alexa agreed and they exchanged numbers. Alexa went to see her sister and told her about Drew. Her sister was surprised that Alexa, who she thought was a prude, had actually agreed to go out with a stranger. Meanwhile, Drew ran into Josh and told him he was bringing his new girlfriend to the wedding. Alexa went out to get a new dress with her best friend Maddie, who also just happened to be a stylist. Drew felt anxious that Alexa might bail on him. He did not want to go to the wedding alone because, despite what he had implied to Alexa, he had been cruel to Molly when he broke up with her. Molly and Josh were such genuinely nice people that they wanted Drew to be in their wedding, but Drew just felt like he was out of place and unwanted after what he had done to Molly. He went to the rehearsal dinner and waited for Alexa to arrive. When she got there, he thought she looked beautiful. They flirted all night and he walked her to the BART train after dinner.

On the day of the wedding, Alexa went over to Drew’s hotel room to get ready so it would look like they were dating. They nearly kissed, but one of the groomsmen came to the door and told Drew it was time to go take pictures. Alexa got ready and met Drew at the wedding. Again, he thought she looked beautiful. They flirted all night, though some of the bridesmaids were rude to Alexa and one man made a racist comment to Drew about her. Nonetheless, Drew and Alexa ignored all the negativity and ended the night together in Drew’s room. When they woke up, he secretly changed his flight from noon until eight at night so he could spend the day with Alexa. They went to the park together and talked about their lives. After he took her home and left to the airport, she thought that their relationship was over, but he decided to text her and asked her to come down to LA the next weekend.

Alexa flew down to see Drew. His surgery ran late, so he asked his friend Carlos to pick her up. She and Carlos got tacos and got to know one another while they waited for Drew. When Drew got home, Carlos left, and Drew and Alexa had sex. They spent the weekend together in bed, talking about their lives. At the end of the weekend, Drew asked if he could come up to see her the following weekend, and she agreed again. When Alexa got home, she called her friend Maddie and they talked about Drew. Maddie asked her if Drew was sleeping with anyone else, and Alexa panicked because she did not know. She texted him and asked him if he was, and he responded with a sarcastic message: “Not at the moment, I’m at work” (127). Alexa uninvited him and was upset all weekend. Drew was upset all weekend, too. Both of them spent time with their best friends, Maddie and Carlos, who consoled them. The next week, Drew came up to San Francisco and happened to stop into a bar where Alexa was attending a birthday party. They both apologized, kissed, and left together. The next morning, Drew told Alexa he was only sleeping with her and that is how it would remain for as long as they were seeing one another.

Alexa went to LA to see Drew the next weekend. They spent the whole time eating great food and having sex. Drew made plans to come up the next weekend. They spent the week texting one another, and then they spent the weekend in Berkeley at Alexa’s house, just hanging out on the couch while she worked from home. The next weekend neither of them was able to travel, so they were both upset and missing the other. Alexa had a bad time at work when her pet project did not go over well. Drew had a bad day at work when one of his favorite patients got diagnosed with cancer. Drew spontaneously flew up to see Alexa. They confided in one another.

The next weekend, Alexa flew down to LA. She and Drew went to a party and she met a bunch of his exes, who all told her that they had dated Drew briefly until he had spontaneously pulled away. Terrified that she was going to be treated the same way, Alexa pulled back. She and Drew got into a fight when he asked her what was wrong. They went back to his apartment together when he got called into work. Alexa started to pack to go home, but he begged her to wait until he came back from surgery so they could talk. When he came back, she cried, and he told her that he wanted to be with her. In the morning, Alexa left without saying goodbye because she was certain that he was lying about wanting to be with her. Drew resigned himself to the end of their relationship, but then he talked to Carlos and Abby, the mother of a child who had cancer, and they convinced him to fight for his relationship if it mattered to him. He flew up and surprised Alexa after her city council meeting. He told her that he loved her, and she said she loved him. A year later, he proposed to her in the elevator where they first met, and she said yes.

More summaries and resources for teaching or studying The Wedding Date.