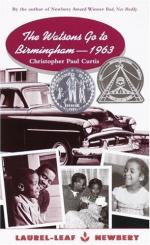 Plot Summary
+Chapters Summary and Analysis
Chapter 1, And You Wonder Why We Get Called the Weird Watsons
Chapter 2, Give My Regards to Clark, Poindexter
Chapter 3, The World's Greatest Dinosaur War Ever
Chapter 4, Froze-Up Southern Folks
Chapter 5, Nazi Parachutes Attack America and Get Shot Down over the Flint River by Captain Byron Watson and His Flamethrower of Death
Chapter 6, Swedish Cremes and Welfare Cheese
Chapter 7, Every Chihuahua in America Lines Up to Take a Bite out of Byron
Chapter 8, The Ultra-Glide!
Chapter 9, The Watsons Go to Birmingham—1963
Chapter 10, Tangled Up in God's Beard
Chapter 11, Bobo Brazil Meets the Sheik
Chapter 12, That Dog Won't Hunt No More
Chapter 13, I Meet Winnie's Evil Twin Brother, the Wool Pooh
Chapter 14, Every Bird and Bug in Birmingham Stops and Wonders
Chapter 15, The World-Famous Watson Pet Hospital
Characters
Objects/Places
Themes
Style
Quotes
Topics for Discussion
Order our The Watsons Go to Birmingham--1963 Study Guide

Christopher Paul Curtis
This Study Guide consists of approximately 39 pages of chapter summaries, quotes, character analysis, themes, and more - everything you need to sharpen your knowledge of The Watsons Go to Birmingham--1963.

The Watsons Go to Birmingham--1963 Summary & Study Guide includes comprehensive information and analysis to help you understand the book. This study guide contains the following sections:

This detailed literature summary also contains Topics for Discussion on The Watsons Go to Birmingham--1963 by Christopher Paul Curtis.

In The Watsons Go to Birmingham—1963, the Watsons are a black family living in Flint, Michigan, and the narrator Kenny is the middle child, an intelligent boy who is often made fun of at school. Because Kenny's older brother By continually gets into trouble, the family travels to Birmingham, Alabama, so that By can spend the summer with his grandmother. The family is in Birmingham when segregationists blow up a church, and initially, everyone thinks that By's sister Joey has been killed. Kenny, who sees the destruction at the church, has to come to terms with this act of hatred.

Kenny is the middle child in a black family of five living in Flint, Michigan. Dad has a sense of humor and likes to "cut up." Momma is from Birmingham, Alabama, and the frozen winters in Flint are too cold for her. Kenny's older brother, By, is thirteen, and he is a bully who's been left behind at school. He is so vain that he gets his lips stuck to the side mirror of the car he's supposed to be de-icing because he tries to kiss his reflection. Kenny's younger sister, Joey, is in kindergarten. Kenny is good at reading and his teachers all think he's smart, but the other children make fun of him, especially since Kenny has a lazy eye that makes him look cross-eyed. At Kenny's school, he is sometimes bothered by a bully, Larry Dunn. Kenny also makes friends with Rufus, a poor boy from the South who the other kids make fun of.

By lies to his younger siblings all the time, including telling them that Southerners have thin blood that makes them freeze up dead in the cold, a story that makes Joey stop whining about her mother over-dressing her every day. By gets in trouble for lighting matches in the house for fun, buying food on the family's credit when he's not allowed, and many other "adventures." He finally gets his hair dyed and straightened in a Mexican haircut, and his parents are fed up. They decide to take him to Birmingham to stay with his grandmother until he straightens up.

The family drives down to Birmingham in their old car, the Brown Bomber, that Dad has fixed up for the trip. Down in Birmingham, By seems to start misbehaving less right away. Kenny, though, gets into trouble when he swims where he's not supposed to and almost drowns. He sees the Wool Pooh, a monster By made up in one of his lies, but which Kenny believes is real. Kenny is still recovering when a local church is bombed by segregationists. The whole family thinks Joey has died. Kenny goes to the church and sees a girl trapped under concrete that he thinks is his sister. He sees the Wool Pooh again, and wrenches the girl's shoe from the monster. It turns out that Joey left the church and is fine, but back in Birmingham, Kenny is ashamed that he didn't save the girl he thought was his sister. He struggles with understanding what happened in Birmingham, and his brother By helps him work through some of his feelings.

More summaries and resources for teaching or studying The Watsons Go to Birmingham--1963.