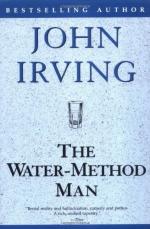 John Irving
This Study Guide consists of approximately 34 pages of chapter summaries, quotes, character analysis, themes, and more - everything you need to sharpen your knowledge of The Water-method Man.

This detailed literature summary also contains Topics for Discussion and a Free Quiz on The Water-method Man by John Irving.

Fred "Bogus" Trumper is a young graduate student trying to figure out what to do with himself. Whether hitchhiking across Europe, playing the family man, or editing a movie about his own life, Bogus has trouble finishing anything. In his adventures, he is always accompanied by persistent problems with urination, which he tries to cure with the "Water-Method." Growing up in New England, Bogus (so called because he lies so much) is best friends with Merrill and Couth, two local boys. When Bogus and Couth both lose their virginity to a girl named Elspeth, she gives them both the clap (gonorrhea). This is the beginning of many years of frequent, painful urinary tract infections for Bogus. He is treated by his own father, who is a urologist.

When Bogus is working on his Ph.D., for his thesis, he is translating an ancient poem in a forgotten language. To do "research," he goes to Austria with Merrill. The two young men wander around, usually drunk. Merrill brags to Bogus that there is an old army tank sunk in the bottom of the Danube river, and that if one swims over it just right, one can see inside. They watch an interview on television of a young American athlete who has just won the gold medal in a women's skiing event. A few drinks later, Merrill is on the verge of passing out from diabetes, when the Olympic skier from the interview walks into the bar and sits down next to Bogus. Merrill wakes up just enough to grope the girl, who beats him up. The skier, whose name is Biggie, helps Bogus get the unconscious Merrill back to their hotel, and Bogus and Biggie spend the night together. Biggie tours Europe with Bogus for a few months before they return to the U.S.A. By that point, she is already pregnant. They hastily get married, and when Bogus's parents hear what he has done, they cut him off financially.

Biggie has a baby boy named Colm. Both of them are terrible with money, and their house and car are both falling apart. In debt up to his ears, Bogus asks Couth to loan him some money. Couth has a great job as a caretaker of the summer home of a wealthy family in Maine. Bogus meets a man named Ralph, an amateur filmmaker. Bogus starts doing sound editing on some projects. Bogus comes close to having an affair with a young college girl. When he gets home, Biggie can tell he has been with another woman, and they have a huge fight. Bogus's father finally decides to loan him some money, so Bogus pays off most of his debts and flees to Europe. In a daze, looking for Merrill, he loses six months. He gets mixed up with the CIA, who make him run a hashish deal for them. Bogus finds out that Merrill is dead, having drowned trying to get a look at the tank in the Danube. Finally, Bogus goes to Maine to see Couth and discovers that Biggie has filed for divorce and wants to marry Couth. Bogus goes back to New York, where Ralph takes him over to the home of Tulpen, a girl who edits his films. Soon Tulpen and Bogus are dating, and Bogus is doing sound for Ralph's movies.

Ralph tells Bogus that the next movie he wants to make is a documentary about Bogus himself, focusing on the breakdown of his marriage and his subsequent relationship with Tulpen. Bogus does not like the idea but agrees to it. Bogus decides to go consult yet another doctor about his urinary problems, and this doctor recommends the "Water-Method." Bogus tries the Water-Method for a while, but he eventually gets another infection. At Tulpen's urging, he decides to go ahead and get an operation. As he prepares for his surgery, Tulpen starts talking about how she wants a baby. Bogus tells her that he is happy with the one he has and doesn't want another. The operation is a success. Although it takes some time to heal and is very painful in the meantime, Bogus can finally urinate normally.

Bogus finds out that Biggie is pregnant. He runs away to Iowa to finish his thesis. Once he has his Ph.D., he goes to a showing of the movie about his life. He discovers, at the end, that Tulpen is pregnant with his child. Bogus goes to Tulpen's house and finds that she has given birth to a baby boy named Merrill. He decides to stay with her and get married.

More summaries and resources for teaching or studying The Water-method Man.