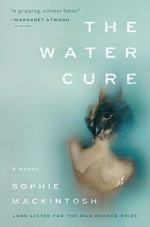 This detailed literature summary also contains Quotes and a Free Quiz on The Water Cure by Sophie Mackintosh.

The following version of this book was used to create this study guide: Mackintosh, Sophie. The Water Cure. New York: Doubleday, 2018.

The novel is set on an island, where sisters Grace, Lia, and Sky live with their mother (whom they call Mother) and their father, King. However, King has recently disappeared and is presumed dead. Grace is pregnant, presumably by King, as there is no one else living on the island. The sisters have been taught by their parents that the outside world is toxic, and that the men there are dangerous to women. It is gradually revealed that King and Mother used to run a clinic to help damaged women from the mainland recover from the abuse inflicted on them there, using a number of “therapies” (19) and the “water cure” (149). The sisters have also been subjected to these therapies, which include being forced to jump into the swimming pool with weights attached to their clothes, and a ritual involving irons. The irons have each family member's name written on them, with the exception of one that is blank. Each person takes turns drawing an iron, and the name chosen is the family member they are expected to love or receive love from. Lia draws the blank iron, meaning she is to receive no love that year. The women grieve King's loss for five months, until suddenly they see two men and a boy have washed up on the beach.

The men are James and Llew, two brothers, and Llew's young son Gwil. Mother is hesitant to let them in the house, but ultimately does, with strict rules limiting their interactions with the sisters. Nevertheless, Lia is instantly attracted to Llew. They begin a courtship, despite Grace's warning that being in close proximity with a man will make Lia sick. Grace delivers her baby, a boy, but it is stillborn. Mother asks Lia to take the baby out in a boat and place it into the sea. She then gives the sisters, who are normally not permitted to show emotion, five minutes to cry under a tarp. The next day, Mother is missing. The men claim she has gone to the mainland to fetch supplies. Llew and Lia continue their affair, and without Mother's watchful gaze, he begins sleeping in her room. One day, Llew catches Grace and Sky taunting Gwil, and he is furious. James suggests the sisters return with them to the mainland.

Lia recalls the manipulative parenting tactics employed by King and Mother when the sisters were children, including taking Lia's favorite toy and giving it to Grace, and then giving Grace more food than Lia at mealtimes. This caused the sisters to turn on each other often. Lia finds Llew on the tennis court and asks him if he would like to do something with her, but he declines because he is spending time with Gwil. Lia becomes insistent, and Llew responds with anger, telling her he does not belong to her. Lia goes to Mother's bedroom and takes the irons from the iron ritual off the wall. She brings them to the forest and buries them in the hollowed out trunk of a tree. That night, the sisters are on the terrace when they spot a mysterious figure in the ocean. Everyone is disturbed by this, and the men decide to patrol the perimeter of the island. While they are gone, the sisters begin taunting Gwil again, and he runs away in tears. When Llew returns and finds his son gone, he locks the sisters in Grace's room.

Gwil's body is discovered in the forest, where he had gotten caught on a barbed wire fence and stung to death by hornets. Llew takes Lia out on a boat and she believes he is going to kill her. Instead, he ties her up, they have (consensual) sex, and then he tells her that they can never be together again. She responds by telling him she loves him, and he does not reciprocate. Later, back at the house, Lia discovers Grace covered in blood.

Part III of the novel is narrated by Grace, who explains that she had a long term romantic relationship with King, who was not her biological father. James asks Grace to talk to him privately, and explains that the men did not arrive on the island by accident, but had been sent by King to retrieve the sisters and bring them to him. He admits that Llew killed Mother, but claims it was self-defense, and also tells her that the island is not an island at all, but only separated from the outside world by the barbed wire fence in the forest. He goes on to say that the world beyond the fence is not as toxic and violent as King and Mother have told the sisters, and declares that, at 30, Grace is not too old to start over. Grace responds by cutting his throat. She finds Sky and Lia, and tells Lia that she must kill Llew, because otherwise he will kill them in retribution for the deaths of James and Gwil. Sky knocks Llew unconscious with a vase, and they tie him up and take him to the beach. Lia, forced to choose between her sisters and the man she loves, opts to shoot Llew with Mother's gun. At the end of the novel, the sisters perform the water cure on each other, which involves holding one another's heads under in a basin of saltwater. They then walk into the forest and help each other over the fence into civilization. They do not plan to find King, but to start new lives for themselves.