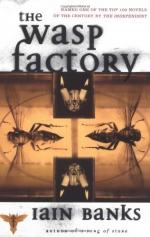 Iain Banks
This Study Guide consists of approximately 32 pages of chapter summaries, quotes, character analysis, themes, and more - everything you need to sharpen your knowledge of The Wasp Factory.

Frank Cauldhame captures wasps and uses them to provide answers and predictions in the secret Wasp Factory he maintains in loft of his home.

Frank Cauldhame affixes heads of dead animals to the top of poles. These poles are distributed around the island he lives on to scare people away.

Frank Cauldhame keeps dozens of skulls of dead animals in the secret bunker, including the skull of his nemesis, Old Saul.

Mrs. Cauldhame is obsessed with measuring the dimensions of everything in his house—tables, doorways, anything that can be measured. He records these measurements in a book.

The Cauldhames live on an unnamed island off the coast of Scotland.

The Cauldhame Arms, named after Frank's family, is a pub in Porteneil, the small town near the island. Frank hangs out with his friend, Jamie...

More summaries and resources for teaching or studying The Wasp Factory.