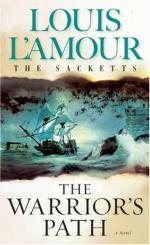 This detailed literature summary also contains Topics for Discussion and a Free Quiz on The Warrior's Path by Louis L'Amour.

The Warrior's Path by Louis L'Amour is the story of a backwoodsman, Kin Sackett, who is called upon to help save two girls who disappear while walking in the woods. Kin soon discovers that although Indians have been blamed for the abduction of the girls, it is actually a plot by very powerful individuals to capture white girls that are disliked in their communities and sell them as slaves over seas. Kin is able to save the girls but cannot rest until he has stopped the men responsible even if it puts his own life in danger.

Kin Sackett is at home when he gets word that his brother's wife's sister, Carrie, and her friend, Diana, have been taken by a tribe of Indians and there is no one else to go after the girls. Kin and his brother Yance load up and head to look for the two girls who were taken. Carrie is an acceptable loss to those in the village because they dislike Diana who is said to be a witch. Kin and Yance soon start the hunt for the girls and discover that no group of Indians could have taken the girls. The girls are being held by several men who work for a man from Diana and Carrie's town named Joseph Pittingel. The girls are to be put on a boat and taken to Port Royal where they will be sold as slaves.

Diana is very resourceful and with the help of an African slave named Henry, the girls are able to get away. By this time Yance and Kin are close by and are able to find the girls and help them find somewhere safe. Once Kin feels the girls are safe he decides that he will go to Port Royal and try to find at least one of the other girls that have been taken over the years, all supposedly by Indians, and see if he can get a sworn statement against Pittingel.

Once in Port Royal, Kin is attacked several times and Joseph Pittingel arrives with Diana in tow. Joseph says he is going to kill her but Kin is too quick and together he and Diana make their escape once again. They get on a ship and head back home when the ship is attacked. They are able to defeat the other ship but their vessel is badly damaged and they must land. When they land Diana and Kin are married by the ship's captain and then they head back to Kin's home.

When they return home Kin's settlement is attacked by Joseph Pittingel's right hand man, Max Bauer and they threaten to kill everyone in the village unless they get Diana. There is a battle and Kin must face off against Max. It seems that Max might win but eventually Kin is able to get Max in a vulnerable position and kill him with a knife.