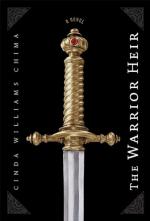 Cinda Williams Chima
This Study Guide consists of approximately 51 pages of chapter summaries, quotes, character analysis, themes, and more - everything you need to sharpen your knowledge of The Warrior Heir.

This detailed literature summary also contains Topics for Discussion and a Free Quiz on The Warrior Heir by Cinda Williams Chima.

Jack Swift is born a wizard to parents who have no such inclinations in the small town of Trinity, Ohio. He is watched over by his Aunt Linda, an enchanter of considerable skill, and Nicodemus Snowbeard - the wizard who ensures his protection and safety from those who would kill him, or use him to their own gain. Jack is born without a crystal, which would in most cases mean certain death, but Linda uses her influence with Dr. Longbranch, a premier wizard for the White Rose, to have a crystal implanted in his newborn body. Dr. Longbranch has ulterior motives however, and in an unprecedented experiment, she implants a Warrior's crystal where a Wizard's crystal belongs, confessing the deed only afterward. As such, Jack reaches maturity and begins to display the gifts of his heritage and much more.

Jessamine Longbranch sees Jack as a way for her to create a Warrior for the White Rose, something in short supply on either side. The White and Red Roses have been fighting for supremacy since the early 1500's, often stealing children of promise from their parents when they are merely infants, raising them into a life of preparation for the Game, held only when Warriors can be found. She would have taken Jack as an infant, but Linda uses her skills to convince Jessamine that her life would be easier if Jack were left with his parents until his powers manifest. Jessamine agrees, but only with the understanding that when the time came, Jack was hers. Meanwhile, Jack takes daily doses of Weirsbane she provides him, to keep his status from becoming public knowledge, blocking any noticeable leakage of power accidentally. Jack's quiet and safe life begins to unravel the first time he forgets to take the Weirsbane that has been his daily ritual since birth. Instead of taxing the heart he believes is dependent on the medicine, he feels better than ever and begins to wonder if he needs it at all. Of course, without it - he comes to the attention of the others and soon finds himself fighting for his life, and the lives of those he loves.

In a short time, Jack goes from being an ordinary teenage boy to being an apprentice Warrior and novice Wizard. He learns that there is much more going on under the surface of his seemingly normal life, and half of his neighbors and friends are complicit. Linda knows that Jack will soon be sought after, and enlists the help of a first class Warrior and former partner, Leander Hastings. He begins training Jack, but only after Jack gets his first introduction to the dangers that exist now that he is coming of age. With Linda's guidance, and the help of his friends Will and Fitch, Jack retrieves a sword called the Shadowslayer from the grave site of his grandmother, battling his first enemies before he even understands his place. As his life spirals out of his control, he learns that he is part of the Silver Bear Clan, able to trace his routes to the very beginning of the Roses. He becomes both Wizard and Warrior, eventually forced to battle the girl he has come to have feelings for, Ellen Stephenson. In a realm where dragons and spell craft are commonplace, he must pit his strengths against her, battling for control of magical artifacts. Together, they will rewrite history and in the process, liberate themselves and those who come after them.

More summaries and resources for teaching or studying The Warrior Heir.