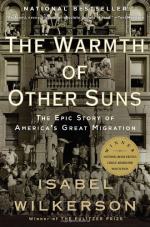 Isabel Wilkerson Writing Styles in The Warmth of Other Suns

The Warmth of Other Suns by Isabel Wilkerson is structured into five main parts. Within each section are sub-sections that are titled but not numbered. She designates no actual chapters per se. Part One, “In the Land of the Forefathers” the three migrants that the story focuses upon, Ida Mae Gladney, George Starling and Pershing Foster are introduced. Wilkerson also describes her personal connection to the Great Migration. Her grandmother was among the six million black who fled the Deep South to escape the oppression that existed there.

Part Two, “Beginnings” provides a more in-depth look at the lives of the three principles with anecdotes about the suffering of other blacks and blacks in general in the South. The events and incidents that compelled these people to flee the South are described. In Part Three, “Exodus” the details of the migration effort are covered.