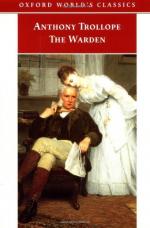 Anthony Trollope
This Study Guide consists of approximately 28 pages of chapter summaries, quotes, character analysis, themes, and more - everything you need to sharpen your knowledge of The Warden.

The Warden Summary & Study Guide includes comprehensive information and analysis to help you understand the book. This study guide contains the following sections:

This detailed literature summary also contains Topics for Discussion and a Free Quiz on The Warden by Anthony Trollope.

A man named John Hiram establishes a charitable hospital for the poor men of the nearby town of Barchester. Four hundred years later, the estate is making enough money that the warden of the hospital has a high salary. When a local man decides to uproot what he sees as corruption, a legal battle rages, with the result that many are hurt, and no one is helped.

Hiram's Hospital houses twelve charity cases, old men from Barchester who have no one to care for them in their old age. Mr. Harding, a priest, is the warden assigned to look after the men. He receives a salary based on the value of the land, and after so many years, the land has become very valuable. Mr. Harding is a kind man, and gives extra money from his own pocket to the men assigned to his care. He spends most of his time playing his violoncello, either for the beadsmen (residents), or by himself, but enjoys taking care of the men. He is a widower, and his older daughter Susan is married to Dr. Grantly, the archdeacon. His other daughter, Eleanor, is in love with a local surgeon named John Bold. John Bold sees himself as a reformer, and is determined to stop corruption anywhere he sees it. John begins stirring up dissension, talking to lawyers, and telling the beadsmen that Mr. Harding's pay should be split up among them. Dr. Grantly counters by going to his own lawyers, and by telling the beadsmen that they should be grateful for what they receive, and that they have no right to ask for more. Meanwhile, Mr. Harding is shaken as he thinks about whether or not he deserves all this money.

The situation gets uglier, and Eleanor decides that she can not think about marrying John Bold when he is prosecuting her father. Both sides get more and more followers. The case is important to many clergymen, since this can set a legal precedent concerning the role of the Church of England. Tom Towers, a reporter for the newspaper the Jupiter, writes several slanderous editorials about Mr. Harding. Eleanor, worried for her father, goes to John and begs him to stop the lawsuit. Overwhelmed by love and guilt, he agrees, and the two get engaged. John tells his lawyers to withdraw the suit. Mr. Harding is horrified by the newspaper articles, and decides that he can not handle such public persecution. He tells his lawyers that he does not want to press his case, and resigns from the wardenship. Dr. Grantly and Sir Abraham are dismayed. Eleanor, however, is happy that her father has acted with integrity according to his conscience.

Mr. Harding takes a huge pay cut and becomes the priest of a tiny parish. Eleanor and John get married, and John Bold becomes friends with Dr. Grantly. Sadly, the bishop decides not to hire anyone to replace Mr. Harding, and the beadsmen live out the rest of their lives with no warden to care for them. They are worse off than before.

More summaries and resources for teaching or studying The Warden.

The Warden from BookRags. (c)2022 BookRags, Inc. All rights reserved.