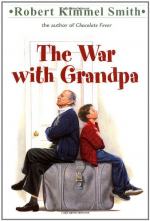 The War With Grandpa Summary & Study Guide includes comprehensive information and analysis to help you understand the book. This study guide contains the following sections:

This detailed literature summary also contains Quotes and a Free Quiz on The War With Grandpa by Robert Kimmel Smith.

They tell him that Grandpa is too old to climb up and down the stairs to use the bathroom if he were to live in the attic. They also tell him that he can't take Jenny's room because Jenny is still too young to be moved. Peter is upset most because he wasn't consulted at all in this and is summarily being removed from the room that he's lived in all of his life, the room he feels safe in.

The first night in the attic is scary for Peter and he hears every little noise that goes on in the room. He does not sleep well at all. The next day he speaks to his friends about what is happening, and they tell him that he should not go down without a fight. Peter decides that they are right.

Grandpa arrives and he looks very sad and forlorn. The reader learns that his wife has recently and her loss has impacted him gravely. He has sold his house in Florida and is moving in with Peter and his family because of his health. Jenny is excited to see him and have him live there, but Peter is furious.

Within the next day or two Peter writes a declaration of war in the form of a letter that his friends help him draft up. He signs it the Secret Warrior, because he doesn't want the letter traced back to him. The first night he sets his grandfather's alarm for 3 o'clock. However, the next morning he can't tell if his grandfather was wakened or not. The next prank he pulls is to take his grandfather's slippers.

Grandpa ignores the pranks at first but then becomes put out and upset when they continue. However, instead of telling Peter's parents, he decides to retaliate in kind. He takes Peter's toothbrush, hides some of his books, and then sets Peter's alarm clock back an hour so that Peter is almost late to school.

Grandpa, realizing that someone needs to make a gesture of goodwill, asks if Peter would like to go fishing. At first Peter does not want to go, but then agrees after all. They talk and Grandpa tells Peter about Pearl Harbor and about real war. During this time together Peter tells his grandfather that he loves him, but that the war is still on.

The next day Peter escalates the entire war by hiding his grandfather's dentures. However, since the alarm clock incident he wants to be there when his grandfather can't find his teeth. But, when he sees his grandfather without his teeth, and looking so humiliated, sad, and disappointed, Peter realizes that in the end, no one wins in a war. He apologizes, helps him find his dentures and they start to truly talk about the underlying problem.

Together they devise a plan that is a win/win situation for everyone. They present their proposal to Peter's parents that night after dinner and Peter's father agrees to renovate the basement into a small apartment for Grandpa Jack.

The War With Grandpa from BookRags. (c)2022 BookRags, Inc. All rights reserved.