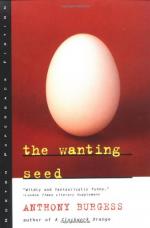 Anthony Burgess
This Study Guide consists of approximately 36 pages of chapter summaries, quotes, character analysis, themes, and more - everything you need to sharpen your knowledge of The Wanting Seed.

This detailed literature summary also contains Topics for Discussion on The Wanting Seed by Anthony Burgess.

The Wanting Seed, by Anthony Burgess, is a dystopian view of a future plunged into worldwide famine and chaos by the mismanagement of government and abuse of the environment. It was published in 1963, a year after the appearance of another dark novel, A Clockwork Orange, which made Burgess famous. The Wanting Seed takes place in Great Britain, although other countries around the world are mentioned in which similar events occur. The novel opens with the mourning of a mother, Beatrice-Joanna Foxe, for her recently deceased little son. The child's body is being commandeered by the Department of Agriculture for use as fertilizer because overpopulation has resulted in a critical shortage of food.

The officials can hardly contain their satisfaction over the boy's death, which enrages Beatrice-Joanna. She seeks solace in her husband's brother, Derek Foxe, with whom she is having an affair. Beatrice-Joanna's husband, Tristram Foxe, is a mild-mannered history teacher at a boys' school, who is oblivious of the treachery of Derek, a high government official. For years, Derek has pretended to be gay because overpopulation has prompted the government to encourage homosexuality as a birth-control strategy. Beatrice-Joanna and Tristram are both repelled by this policy, which Derek accepts glibly. A soldier named Captain Loosely, who feels that he lost a promotion to Derek because he is heterosexual, tells Tristram about the affair between Beatrice-Joanna and Derek. Loosley wants to expose Derek as a closet heterosexual, thus ruining his career. The government has clamped down on birth and when Beatrice-Joanna becomes pregnant by Derek, she flees to the countryside to have her child. Meanwhile, Tristram accidentally gets caught up in a street demonstration over the food shortage and is jailed.

Derek has received a promotion and has little interest at the moment in Beatrice-Joanna. He has the power to release Tristram from prison, but decides to keep him there. While Tristram is incarcerated, social unrest mounts to dangerous levels over the food shortages. Beatrice-Joanna lives in the rural Northern Province with her sister, Mavis, and her brother-in-law, Shonny, and their two children while she awaits her baby. Tristram grows increasingly enraged over his fate, replacing his timidity with an intention to wreak revenge on his wife and brother. Loosely visits him in prison and Tristram gives him the address of Beatrice-Joanna's sister. Tristram then breaks out of prison and goes after Beatrice-Joanna. On his trip, he sees that social unrest has escalated into murder and open cannibalism. As he journeys, he sees the people rejecting the widespread pose of homosexuality for an uninhibited and heterosexual Congress. Loosely reaches the farm and takes Beatrice-Joanna with him to London, along with her offspring, twin boys. Tristram meets Shonny, who now bitterly regrets helping Beatrice-Joanna, because his own two children have been taken by someone and apparently have been killed and eaten. The government now begins to embrace heterosexuality again. Derek begins openly living with Beatrice-Joanna, and Loosely is demoted. Tristram is conscripted into the army and eventually is shipped to Ireland to fight in a mysterious war. It turns out to be a hoax, in which both sides have been forced by the government into battling each other, to reduce the population. Tristram, the sole survivor from his battalion, escapes and returns to England. After a period of physical and spiritual recovery, he reunites with Beatrice-Joanna, who has longed for his return. Tristram's tribulations have erased his desire for revenge. A new government is installed and at the novel's end, it appears that a period of relative stability and sanity will begin.

More summaries and resources for teaching or studying The Wanting Seed.