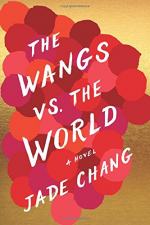 The Wangs Vs The World Quotes

Jade Chang
This Study Guide consists of approximately 72 pages of chapter summaries, quotes, character analysis, themes, and more - everything you need to sharpen your knowledge of The Wangs Vs The World.

He shouldn't be here at all. Never should have set a single unbound foot on the New World. There was no arguing it. History had started fucking Charles Wang, and America had finished the job.
-- Charles Wang

Importance: This quote summarizes Charles Wang's entire belief about who he might have been and what he might have done if his family in China had not had their land taken. He mythologizes the greatness of the China of the past without realizing that it was purely American capitalism that allowed him to rise so high.

His father's English sounded more broken than usual. Not that he'd ever bothered to perfect it in the first place--the rules of grammar were beneath him, bylaws for a silly club that he had no intention of joining.
-- Andrew

Importance: The use of language is essential in the novel. Written in English, it also uses both translated and untranslated Chinese to either...

More summaries and resources for teaching or studying The Wangs Vs The World.

The Wangs Vs The World from BookRags. (c)2020 BookRags, Inc. All rights reserved.