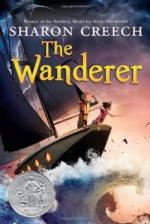 Sharon Creech
This Study Guide consists of approximately 30 pages of chapter summaries, quotes, character analysis, themes, and more - everything you need to sharpen your knowledge of The Wanderer.

The Wanderer Summary & Study Guide includes comprehensive information and analysis to help you understand the book. This study guide contains the following sections:

This detailed literature summary also contains Topics for Discussion and a Free Quiz on The Wanderer by Sharon Creech.

The Wanderer is a story of thirteen-year-old Sophie's return to the sea to visit her Bompie in England. Although Sophie is ecstatic at the thought of sailing across the ocean, she struggles with a dark fear of the sea that will slowly unravel as the journey progresses.

At the opening of the novel, thirteen-year-old Sophie begins by writing about her love for the sea and describing a vivid nightmare she has about a giant black wave coming to consume her. This love/fear is central to the mystery surrounding Sophie's character, and history, throughout the novel. Sophie has fought her way onto the family's sail boat The Wanderer for a cross-country trip to visit her Grandfather, Bompie, who lives in England. As the novel progresses, the reader learns that this family is not Sophie's blood family but her adoptive family - she was adopted three years earlier - and that no one really knows the truth of what happened to Sophie's real parents. Sophie herself doesn't even acknowledge that she had other parents and refuses to talk about being adopted, much to the consternation of her two curious cousins, Brian and Cody.

When Sophie first arrives on the boat, she struggles to figure out where she belongs and often feels as if the with whom men she's traveling treat her differently because she's a girl. In time, however, she learns to adapt to the motto of being part of a team, and is able to showcase her strengths as a sailor without overshadowing the rest of her team. The crew makes various stops on their way to England, including a stop at Grand Manan where Sophie and Cody explore the old ghost island. This experience deeply bonds the two cousins, but opens up many more questions for Cody about what secrets are hiding in Sohpie's past. When the crew is on their way to the Irish coast, disaster hits in the form of a giant white wave that crashes into the boat, nearly killing everyone aboard. The crew all manage to survive, but the boat is badly battered. In this moment, Sophie is forced to face her largest fear - a reoccurring nightmare she has of a giant black wave coming to consume her.

When the crew finally make it safely to Ireland and are reunited with Bompie, everyone is startled to hear that Bompie does know who Sophie is even though he's never met her before. Throughout the entire journey, Sophie had told the crew "Bompie stories" that they all believed she had made up even though she insisted Bompie had told her. When Sophie recounts the stories with Bompie in the room, he verifies that, yes, he did share all these stories with Sophie, except one. When Sophie recounts the story of Bompie's parents being lost at sea all eyes turn to Sophie. Clearly she is not recounting Bompie's story but her own. The tragic truth of Sophie's past is revealed, and her family still embraces her with open arms.

More summaries and resources for teaching or studying The Wanderer.

The Wanderer from BookRags. (c)2022 BookRags, Inc. All rights reserved.