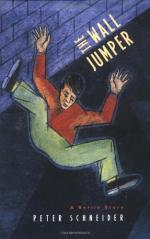 Seen from the air, Berlin is a single city, a maze of fortress-like, rectangular structures. New housing on the edges seem to have been dropped in place by helicopter. The Wall zigzags through, allowing only shadows to pass freely. The Narrator has lived 20 years in this scarred, antiquated, but living city.

Landing at Schönefield Airport, only Germans fail to curse the uncomfortable shuttle bus. Clothing and expressions differentiate those West- and East-bound. A man who could be Polish, Bulgarian, or Russian asks to share a cab with the Narrator cannot understand believe that anyone lives in West Berlin, for the map shows no streets there. On Western maps, the Wall is a light pink line; on Eastern ones it is as thick as a finger, marking a state border.

The Wall has just gone up when the Narrator moves to Berlin. After...