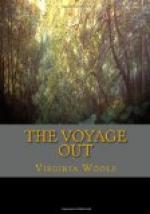 The Voyage Out Summary & Study Guide

Virginia Woolf
This Study Guide consists of approximately 56 pages of chapter summaries, quotes, character analysis, themes, and more - everything you need to sharpen your knowledge of The Voyage Out.

The Voyage Out Summary & Study Guide includes comprehensive information and analysis to help you understand the book. This study guide contains the following sections:

This detailed literature summary also contains Quotes and a Free Quiz on The Voyage Out by Virginia Woolf.

The following version of the book was used to create this study guide: Woolf. Virginia. The Voyage Out. Modern Library, 2000.

In this novel, Woolf follows Rachel Vinrace and Helen Ambrose as they leave England on the Euphrosyne, a ship captained by Rachel's father and Helen's brother-in-law, Willoughby. Rachel is young and naive. She frustrates Helen with her lack of knowledge and conversational skills. When they make a stop in Lisbon for Willoughby to do some business, Willoughby returns with two new passengers: Mr. Richard Dalloway and Mrs. Clarissa Dalloway. The two attempt to liven up the vessel with their conversation and congeniality. This warmth draws Rachel out of her shell a bit and she befriends the Dalloways. There is a storm, which makes most of the passengers ill. After the storm, Richard goes out onto the deck and meets Rachel. Richard follows Rachel into her room and, after a wave rocks the ship and pushes them closer, kisses her passionately. Once he leaves, Rachel is frustrated and confused. The Dalloways leave at the next port. Rachel confides in Helen, and Helen is shocked that Rachel knows so little of men and the world. Helen sets out to educate her on the ways of the world, feeling a maternal impulse toward her.

Once they arrive in Santa Marina, a town on the coast of South America, Helen and her husband, Ridley, take Rachel to live with them in their villa. Rachel takes to reading and enjoys having the space and time to begin to know her own mind. One night, after collecting and mailing letters from an English ship, Rachel and Helen take a walk through the little town, ending up at the hotel where English tourists are staying. From inside, they are seen by St. John Hirst who is looking out the window while the other hotel patrons are chatting, smoking, and playing bridge. Briefly, we are transported into the hotel and into the minds of the people inside. Particularly, we witness a conversation between St. John Hirst and his close friend, Terence Hewet. The two are young intellectuals from London, and they discuss Hirst’s lack of social skills, particularly with women. Hewet is a very social person and suggests that they lead an expedition to facilitate bonding in the group and for Hirst to practice talking to women.

Helen and Rachel are also invited on this expedition, and they decide to go since they do not know many people in Santa Marina. On the expedition, Hewet strikes up a conversation, finding her interesting as she distances herself from the crowd and people-watches. Together, they come across a couple, Susan Warrington and Arthur Venning, who have just become engaged. They are kissing in the grass, and Rachel and Hewet are caught off guard by witnessing this intimate moment with someone they have only just met. This seems to make them more comfortable with each other, and as they talk, they run into Hirst and Helen, who have also been talking. The four become a fairly close friend group and, after the expedition, spend quite a bit of time together. Hirst particularly attaches to Helen, who he thinks of as the only person whom he can truly have a good conversation with.

Helen and Rachel start spending more time at the hotel with the guests there, particularly Hewet and Hirst, who are also frequent guests at the Ambroses’ villa. Hewet and Rachel start spending more time together and realize they have feelings for one another. They are confused and have difficulty discussing this with each other. Mrs. Flushing, one of the hotel guests who is quite eccentric and adventurous, proposes an expedition to nearby village. Mr. and Mrs. Flushing, Hirst, Hewet, Helen, and Rachel make up the party. When the steamer pulls ashore, Rachel and Hewet go for a walk in the woods, while the rest of the party stays on the shore. The freedom of being alone and so far from their original context inspires them to confess their love for one another. They decide to get married, seeing that as the requisite next step to love. On another walk, Helen discovers Rachel and Hewet together. The two tell her of their engagement. The entire party proceeds to the village and explores while Mr. and Mrs. Flushing talk and trade with the local people, as they plan to sell the goods when they are back in London.

Hewet and Rachel start life as an engaged couple. They clash over little things like going to tea with the hotel guests together. Rachel hates being the center of attention, but Hewet thinks they should be more social. Despite these minor disagreements, it is still clear they are comfortable with each other and content to take long walks and talk or read poetry. Unfortunately, their happiness does not last. Rachel falls ill, and because of the incompetence of the local doctor, her condition worsens. Hewet is in denial and argues with Helen about the severity of Rachel’s condition. However, Rachel starts to hallucinate vividly. Hewet, in a panic, sends Hirst in search of another doctor. Eventually, he returns with a doctor who is much more competent - Hirst has plucked him from his vacation nearby. Though this doctor is much better, he is grave when he observes Rachel and makes it clear there is not much he can do for her. Eventually, he gently informs Hewet that he should go upstairs. Hewet sits with Rachel before she peacefully dies in her sleep.

Hewet is distraught, but Hirst cannot help feeling relief that the entire ordeal is over. We are taken back to the perspective of the hotel guests as they murmur here and there about how sad Rachel’s death is. A storm blows up, and for a while, all of the hotel guests stand in silent awe together in the big room, powerless against nature. As the storm winds to a close, Hirst returns to the hotel. The guests are settling into their evening routines, many watching a game of chess two old men are playing. Hirst sinks into a chair, finally resting, watching as the guests chatter and eventually disperse to bed.

More summaries and resources for teaching or studying The Voyage Out.

The Voyage Out from BookRags. (c)2022 BookRags, Inc. All rights reserved.