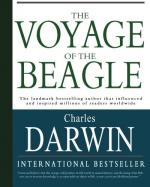 The Voyage of the Beagle Summary & Study Guide

The Voyage of the Beagle Summary & Study Guide Description

The Voyage of the Beagle Summary & Study Guide includes comprehensive information and analysis to help you understand the book. This study guide contains the following sections:

This detailed literature summary also contains Topics for Discussion and a Free Quiz on The Voyage of the Beagle by Charles Darwin.

Charles Darwin (2/12/1809-4/19/1882) writes about his explorations of various places he visits as a 19th century naturalist during a long voyage around the world. He ships aboard the Beagle, a ten-gun brig, anchoring at St. Jago (Sao Tiago), the primary island in the Cape de Verd group located west of Africa. From there he sails to St. Paul's Rocks, Brazil, Patagonia, East Falkland Island, Tierra del Fuego, Chile, Peru, the Galapagos Islands, Tahiti, New Zealand, Australia, Tasmania, Mauritius and St. Helens Island before returning home. The entire trip takes five years to complete.

Darwin walks the jungles of Brazil, rides with the gauchos and explores rivers, mountains and plains. He meets many different kinds of people along the way, from the most primitive to the stylishly modern. His main purpose is to gather specimens of unknown species and study how the earth has formed islands, mountains and plains. He observes cultures as an anthropologist, life as a biologist and the earth as a geologist.

His most favorite place is Tahiti and least favorite Tierra del Fuego. Tahiti offers beautiful scenery and lush vegetation. The people are friendly and beautiful in their own ways, although alien to Darwin's eyes. Tierra del Fuego, situated near the Strait of Magellan, is a stormy and cold place inhabited by very primitive natives.

For his scientific work, the Galapagos Islands offer the most important observation of Darwin's career. He notices that each island has unique bird and animal life, although the same species. He begins contemplating why and how species differentiate although relatively close together. This will lead to his ideas on the origination of species, and eventually lead to the theory of evolution.

Part field notes and part adventure story, The Voyage of the Beagle offers the diligent reader insights into the world of the 19th century, the state of science at that time, and Darwin's experiences. He explores all types of terrain while trying to understand how the land has formed. Caught in a revolution, he nearly becomes stranded in South America. Darwin crosses the Andes, rides across the desert, learns to throw the bola, and teases an aggressive penguin. His five years of exploration and discovery leave him very satisfied with the experiences, and he recommends others take similar journeys.