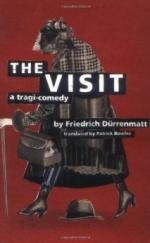 Friedrich Dürrenmatt
This Study Guide consists of approximately 29 pages of chapter summaries, quotes, character analysis, themes, and more - everything you need to sharpen your knowledge of The Visit.

The Visit: A Tragi-comedy Summary & Study Guide includes comprehensive information and analysis to help you understand the book. This study guide contains the following sections:

This detailed literature summary also contains Topics for Discussion and a Free Quiz on The Visit: A Tragi-comedy by Friedrich Dürrenmatt.

The impoverished town of Guellen looks to Claire Zachanassian for financial salvation. When she offers them a million dollars if they kill Ill, a citizen of the town and her former lover, the townspeople initially refuse, but their resolve is worn down by the allure of wealth, and they wind up carrying out her wish.

As the play opens, the townspeople of Guellen are preparing for the arrival of Claire Zachanassian, a millionaire who was born there, hoping that she will help relieve their poverty. Claire arrives with her husband, her eighth, and her butler, Boby. The townspeople greet her with much fanfare. Among those greeting her is Ill, now an old man, who was once her lover when they were younger. Claire asks to see the places where she and Ill made love and she travels to them. After she leaves, the townspeople remark that she seems to think of herself as some kind of Greek Fate, as if she controls the destiny of men. Meanwhile, Claire and Ill recall their old relationship. Claire was in love with him, but he left her to marry his current wife. Crushed, she left the town and became a prostitute and, luckily, attracted the attention of a rich Armenian whom she married (and later divorced after getting most of his money). Claire and Ill go the town's hotel, the Golden Apostle, and the mayor gives a speech in praise of her. She thanks the mayor and, to the town's delight, offers them a million dollars. They rejoice, but she interrupts by saying that it comes with a condition. Ill, she says, impregnated her and then bribed two men to lie to a judge to avoid any responsibility. Since she was denied justice then, she demands it now and promises to give the money upon Ill's murder. The mayor, on behalf of the town, insists that they will not do it, but Claire leaves the offer open.

Ill, at first heartened by the town's show of support for him, starts to become suspicious as he notices that everyone in the town, even the priest and mayor, have purchased all sorts of new, expensive goods. He fears that they will get used to living that way and will weaken in the resolve not to kill him so they can sustain their lifestyle. Everyone he conveys this fear to dismisses him, but gradually they change their tactic and focus instead on the "crime" he committed against Claire. Ill tries to leave town, but the townspeople stand in his way while schizophrenically denying that they are preventing him from going.

Ill comes to the conclusion that he brought this misfortune on himself by mistreating Claire. The mayor says that the they will hold a town meeting which will decide Ill's fate, and he promises to abide by whatever decision they come to. Ill goes on a ride with his family in his son's new automobile and gets out of the car at Village Wood, a place where he and Claire once made love, and finds her there. They talk for awhile about their past together and what she plans to do with his body. He leaves for the town hall where reporters have gathered to cover the meeting, though they are unaware of the condition Claire attached to her offer. After giving another speech, the mayor has the press leave and the townspeople vote unanimously—except for Ill—to kill him. They immediately surround him and kill him. When the press return, the townspeople say that Ill died of joy to know that the town would be rescued from its poverty. The town then breaks into chorus and reassures itself, citing the evil of poverty and rejoicing in how wonderful their lives will now be.

More summaries and resources for teaching or studying The Visit: A Tragi-comedy.

The Visit: A Tragi-comedy from BookRags. (c)2022 BookRags, Inc. All rights reserved.